Despite the first slip in overall car sales since 2009, December made a strong showing to close the year on a high note.

Analysts at Kelley Blue Book (KBB) reported that the estimated average transaction price (ATP) for light vehicle sales in the US reached $36,113 in December 2017, setting a record high. “[ATP] closed the year on a strong note, rising nearly two percent in December 2017 to set a record high,” said Tim Fleming, analyst for KBB. “Incentive spending was a concern in 2017, averaging 10.4 percent of MSRP, but encouragingly, this figure held relatively flat over the final quarter of the year.”

Fleming noted a concern this year could be interest rate hikes, which would increase monthly payments for consumers. Kelley Blue Book predicts, however, that higher interest rates will contribute to another year of falling new-vehicle sales more than it will impact sales prices.

According to Edmunds, average sales prices in December resulted in a three percent increase compared to December 2016. Another thing to hit an all-time high to close out 2017 was average down payment amounts, estimated to have hit $4,056. This is up $227 compared to the previous December.

“Vehicle prices have been rising all year, but really hit a crescendo in December,” said Jessica Caldwell, executive director of industry analysis at Edmunds. “Even though holiday bonus checks likely played a role in boosting down payments to record levels, when buyers are willing to put down more than $4,000 for a new car, it says something.” 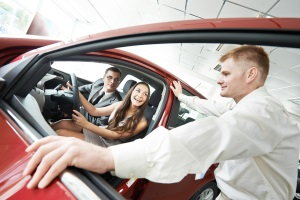 Year-end closeout sales in December are the likely cause of the small uptick in sales of 2017 model year vehicles, according to Edmunds analysts. But just 42 percent of new vehicles sales were 2017 models, a vast improvement compared to the 70 percent in October of 2017. Unfortunately, outgoing model year vehicle sales were still higher than in 2016, when December saw 35 percent of new vehicle sales for that model year.

“Automakers and dealers faced a rather precarious situation at the start of the fourth quarter to record levels of 2017 model year inventory languishing on lots,” Caldwell said. “Although incentives continued to flatten slightly this month it is clear that dealers were highly motivated to meet their year-end goals in December. As we head into a declining market in 2018, it’s at least a positive sign for the industry that dealers will be able to start the new year with a majority of 2018 model year vehicles on their lots.”

Adding to the Consumer Market in 2018

If poor credit kept you from getting in on the sales boom in December, but you’re looking for a new car, let Auto Credit Express help you get into the vehicle you need this year. We work with special finance dealers all across the country that have lenders available to help people whose credit is suffering. We want to connect you to a local dealer that’s right for you. To get started, simply fill out our free, no-obligation auto loan request form today!

Awesome End of the Year Deals on New Cars