Clear Off the Snow before Driving

Can you drive with snow on your car? While a small amount of ice and snow can remain, it’s not safe when it’s flying off your car. In some states, it’s even illegal to operate a vehicle with excessive snow on your car, so it’s important to properly remove any snow and ice before driving off.

The Dangers of Snow on a Moving Car 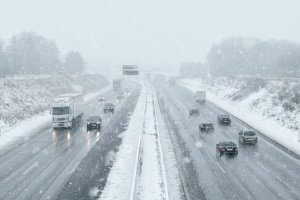 Not only will snow and ice affect your visibility, it can cause serious damage to other cars and people. Many drivers choose to not clear the roof of their cars for various reasons, but this can cause accidents on the road. If it isn’t properly cleared, depending on where you live, you could risk being fined a few hundred dollars for causing unsafe driving conditions.

This is because sheets of ice being blown off car roofs can cause high-impact damage to people and cars. In addition, snow blowing off your car can cause visibility issues for the vehicle behind you.

Since not every state gets snow, laws aren’t the same. Out of the 50 states, there are only four states where driving with excessive snow or ice on your car is considered illegal:

While there are only four states that have an official law against driving with a snow-covered vehicle, other states are able to hand out fines. Instead of implementing a law centered around snow, these states treat snow-covered vehicles the same as any general obstruction of view. The severity of fines is similar to the four states listed, but it’s best to check your state’s rules and regulations for when a fine can be handed out.

Regardless of whether or not it's illegal or you can be fined, driving with snow or ice on your vehicle is dangerous, so it’s important to properly clear it off before you hit the road. The safety of you, your passengers, others on the road, and pedestrians should be the number one priority when driving.

If you’ve experienced damage from snow or ice, and are looking to finance a vehicle, Auto Credit Express wants to take the lead. Our team wants to help by matching you with a local dealership that can get you the financing you need even if you have imperfect credit. Just fill out our easy auto loan request form to get started today.

Why is Wet Pavement More Dangerous to Drivers than Snow?

Do I Need Snow Tires or are my All-Season Tires Okay?

25 Items You Should Always Carry in Your Car

Staying on Top with a Six-Point Vehicle Check

Don’t Be Stressed Over Winter Driving

Prepare for the Cold during Fall Car Care Month