If your family holiday includes a road trip over the river and through the woods, make sure you give yourself plenty of time for safe travels. This Thanksgiving, don’t let your holiday take a tragic turn by driving drowsy or impaired. If you feel a food coma coming on, it’s not the time to get behind the wheel and head to your next family event.

Holiday Travel Season, Are We There Yet?

Millions of Americans hit the road for Thanksgiving travel. A new survey conducted by Harris Poll for Chevrolet revealed that the persistent chorus of “are we there yet?” questions coming from the backseat doesn’t top the list of travel stressors. In fact, traffic, packing for the trip, and the cost of holiday travel for family road trips all ranked higher.

If you plan on a road trip to get to your holiday gatherings, make sure you practice safe driving techniques. Holiday travel makes roads busier than normal, so remember to leave extra time to make up for the increased traffic. The National Safety Council recommends these tips for safe travel: 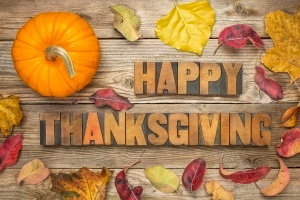 Once you arrive at your destination, everyone knows the drill: eat a big Thanksgiving meal and then it’s time for a nap. Inevitably, someone will blame their sleepiness on the turkey, saying the “trip-ta-what-cha-ma-call-it” in the turkey got to them.

The “trip-ta-what-cha-ma-call-it” is actually L-Tryptophan, an amino acid commonly found in foods such as turkey, chicken, fish, nuts, and pineapple. Normally, it’s one of the last things to enter your brain, stimulating a release of Serotonin, a chemical related to happiness and sleep cycles. But, in fact, it’s not the culprit causing the sudden urge to nap.

The reason the desire to sleep on Thanksgiving is so strong is due to the foods people normally eat with their turkey, namely carbohydrates. Once a heavy dose of carbs hits your system, the insulin released removes amino acids from your body – except for one. L-Tryptophan now has a clear path to absorption, turning on your Serotonin production, and triggering the chemicals that make you sleepy.

Getting behind the wheel when you’re too tired to drive is never a good idea. According to National Highway Traffic Safety Administration (NHTSA) Fatality Analysis Reporting System (FARS) data, there were 90,000 crashes in the US involving drowsy driving in 2015. Of those, 33,000 resulted in injury and 736 in death. Another 56,000 crashes involved property damage, which can quickly ruin any Thanksgiving.

Another factor that increases holiday crashes, as well as drowsiness, is alcohol. According to FARS, alcohol-impaired driving was responsible for one fatality every 50 minutes in 2016. Historical averages show that more than one-third of Thanksgiving Day holiday driving fatalities involve alcohol-impaired drivers.

In fact, in 2015, there were 386 crash fatalities on Thanksgiving, 19 percent higher than other Thursdays in November. This year, the National Safety Council estimates 421 fatalities and 48,500 serious injuries may happen in car crashes during the Thanksgiving Day holiday period (6 p.m. Wednesday, Nov. 22 to 11:59 p.m. Sunday Nov. 26).

Our Services Lead to Thankful Consumers

This Thanksgiving, many people will be travelling to see family, friends, and loved ones. Your vehicle needs to be up to the job of making that journey. If it’s not, but you feel the crunch of bad credit is keeping you from holiday happiness, don’t despair!

Auto Credit Express can guide you toward a dealer you’ll be thankful for. We work with a nationwide network of new and used car dealers who have the resources available to help people with credit challenges. Let us point you in the right direction, just fill out our no-obligation online auto loan request form today!

Why Do Car Rides Make You Sleepy?