Flood-damaged vehicles are best avoided because they typically can't be counted on in the long run. We offer up some tips to help you better recognize cars that have experienced flood damage. 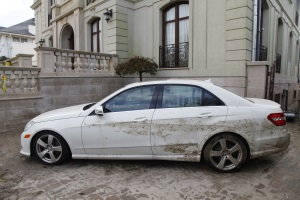 Hurricanes Harvey and Irma and the resulting flooding have caused catastrophic levels of damage. Tens of thousands of vehicles were destroyed. Cox Automotive estimates that 300,000 to 500,000 vehicles may have been damaged by Harvey. They also believe 130,000 to 200,000 vehicles were lost during Irma's initial impact in southern Florida.

Most people who lost their vehicles to flood damage will soon need another. In fact, new car sales have already begun to surge in the Houston area over the past few weeks as people find they really need transportation post-Harvey.

We urge anybody who needs a vehicle to not act too quickly, unless it's brand new. Thousands of vehicles suffered flood damage and some will inevitably end up for sale, and not just in and around the areas affected by the hurricanes. After both Katrina and Sandy, people discovered flood-damaged vehicles from those storms for sale all across the country.

These vehicles should be avoided, so you need to be careful and learn how to spot the signs of flood damage.

How to Spot and Avoid Flood-Damaged Vehicles

If you need a replacement vehicle after a flood-related disaster, it's better to be safe than sorry. Flood damage can cause lasting harm. Even if a car appears to be fine, it could be deteriorating rapidly below the surface. Car buyers should proceed with caution and follow these tips:

Car buyers, especially those around the areas affected by the hurricanes, need to be extra careful over the next few weeks and months. Following these tips will help you avoid getting stuck with a flood-damaged vehicle.

Whether you lost your vehicle to water damage or just need a car loan, Auto Credit Express helps buyers dealing with credit problems find financing. We are teamed up with one the nation's largest networks of special finance car dealerships.

If you are struggling to get approved for an auto loan, we can connect you with a local dealer that specializes in helping people with credit issues purchase cars. Get the process started by filling out our free and easy car loan request form today.

Be Cautious of a Salvage Title Car