An In-Depth Look At Airbags And Safety

Supplemental restraint systems (SRS) have spent a lot of time in the news lately. With all of the press surrounding them, we thought it would be a good time to get a bit more in depth about this unique safety system—the airbag. Notice the first word of their official title is supplemental. The modern airbag is designed to be used along with seat belts, and should not be relied on for safety without them.

The first U.S. patent for Safety Cushion Assembly for Automotive Vehicles was filed August 5, 1952 by John W. Hetrick. He was granted the patent a little over a year later, but, due to technical limitations, the device was not regularly used in production vehicles until the 1980s.

An airbag, by definition, is what its name implies—a bag filled with air. This safety device is located in vehicle steering wheels, dashboards and other places to protect the driver and passenger in the event of a collision. Airbags work on the principles of Newton’s first law of motion, and must deploy at speeds over 200 mph faster than the crash, as it is occurring, in order to work effectively.

To do this, the deployment of an airbag is achieved in a controlled explosion set off when sensors detect a sudden stop in forward motion. This explosion generates a large amount of harmless gas, typically with nitrogen or argon as a byproduct, which fills the nylon bags that protect vehicle occupants. According to embattled airbag manufacturer Takata, this chemical reaction and deployment happen quicker than the blink of an eye. 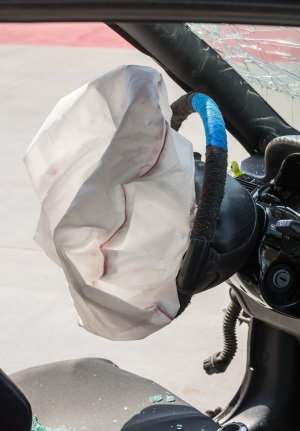 When it comes to such precise scientific and technological processes working together, even the tiniest detail can make a difference in performance. So, when things do not work according to plan, they can be disastrous. This is evident in the ongoing recall of over 42 million airbags, in the U.S. alone, made by parts supplier Takata.

According to Consumer Reports, the core of the recent airbag danger lies with the inflator. These components are loaded with propellant wafers which, in some cases, can ignite with explosive force. The National Highway Transportation Safety Administration (NHTSA) has determined the problem is centered around Takata airbags in which ammonium nitrate-based propellants were used without a chemical drying agent.

Factors such as high temperatures, moisture from the environment, and age associated to the defect, can cause improper inflation. In these cases, if the inflator housing ruptures, metal shards from the housing can be projected throughout the cabin of a vehicle. 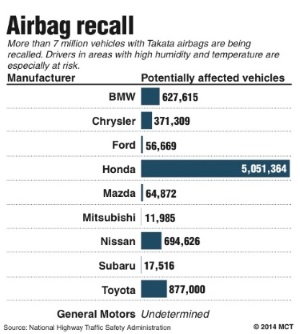 The Scope of the Issue

The potentially dangerous devices were used by 19 automakers and installed in vehicles worldwide between 2002 and 2015. As a result, the recall is expected to replace between 65 and 70 million airbags across the United States.

There have been 11 known American deaths and 180 known injuries to date. Under the oversight of the NHTSA, this recall is being done on a national scale. However, the organization urges automakers to prioritize replacement of inflators in older model vehicles that have spent time in high humidity regions with persistent heat, as they may be at greater risk of failure.

What These Potential Dangers Mean to You

Owners who have one of the affected vehicles will have their airbags replaced free of charge, but only if they take action and get their vehicles serviced. Recent information from Airbag Recall: Southern California shows that more than 200,000 defective inflators are still unrepaired in that part of the state, where vehicle risk is shown to be higher. Even minor accidents that a person would normally walk away from can cause these airbag ruptures, and three Californians have already died as a result.

In order to minimize your risk, it is imperative that you know if your vehicle is one of those being recalled. Though you can use many sources to check if your vehicle’s VIN is on the list, we recommend going straight to the source by visiting the NHTSA site.

Safety and reliability are paramount when it comes to vehicle choices. Here at Auto Credit Express we want our customers to have access to dealers that can make those choices possible. If you are in need of a quality experience that can get you into a vehicle, you can start here.

Auto Credit Express matches consumers with dealers who can provide auto financing options for people in a wide range of situations. Take the first steps toward a vehicle now by filling out our auto loan request form.

Is Your Vehicle Part of the Takata Airbag Recall?

A Good Time for Families to Buy a New Car

What Your Car May Do in the Future

What You Need in a Minivan

Five Things You Didn't Know About Your Car