As we're heading into the holiday shopping season, you could get unexpected savings at the gas pumps as they could reach the lowest they've been in years. 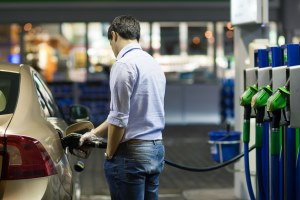 If you're an American driver, then there is no way you haven't been affected by the ridiculously high gas prices over the last few years. It's a sad reality that it has become the "norm" to pay upwards of $3.50 a gallon, and when we see it any lower we get excited and think "That's a good deal!" Luckily though, this monstrosity could be taking a turn for the better, and you could be seeing these prices drop to under $3.00 before the first of the year!

You're probably thinking this is all a big hoax, but according to David Lutz of Stifel, Nicolaus and Company, the EPA (Environmental Protection Agency) is going to be adjusting the federal ethanol mandate that has been acting as a stealth tax for years. Doing this could mean that the national average gas prices will be lower than anything we have seen since the Long Recession of 2008.

Why the Price for a Gallon of Gas Rose so Drastically

Before the Great Recession hit, America was in high demand of gasoline, and because of that the 2005 Clean Air Act stated that refiners must mix a certain amount of ethanol in with the gasoline. Basically, as long as we were using the gas at a high rate, which we were, they would keep adding ethanol to the mix. Unfortunately, what nobody saw coming was the large drop in demand for gas. According to the EIA's (Energy Information Administration) website the demand for gas is at the lowest it has been in over ten years.

The way cars are made these days there are over 90% of American vehicles that will not run on more than 10% ethanol blend, which means when the ethanol requirements were on a steady incline and the need for the product was on a steady decline. This left refiners no choice but to buy and sell RINs (renewable identification numbers) that allow them to meet the terms of the 2005 Clean Air Act. These RINs have reached a high of $1.40 per gallon, which is up from just pennies-per-gallon at the beginning of the year.  The government didn't want to take the financial hit, so as consumers; we got the short end of the stick by acquiring more than 75% of the cost influx.

The EPA attempted to force refiners to burn cleaner fuels, but instead they created a policy that artificially inflated the cost of refining gas. While refiners also took a financial hit for not burning enough fossil fuels, it was us as American drivers that took the biggest hit to our pockets at the pump.

So, after all that, how are we going to start saving at the gas pumps? Lutz says, he sees the price of the RINs that the refiners are buying and selling dropping in the near future. The EPA is now getting around to changing their policy and the Clean Air Act to make better economic sense, which means that once these RINs are no longer part of the problem they can be part of the solution of helping lower the price of gasoline per gallon.

The drop in gas prices is not only going to help American drivers, but it could also help the automotive companies and their sales. When gas prices hit an astronomical high many drivers were turning in their full-size trucks and large SUVs, for a smaller more economical gas saver. Now that the price per gallon of gas could be dropping to under $3.00, the lowest we've seen it in four years, those same people could be on their way back to the dealership to buy, finance or lease a new car, truck or SUV that they've always wanted, but couldn't afford due to gas prices.

At Auto Credit Express, we are excited to see these gas prices go down and see people better able to keep a little bit more cash in their pockets. You can use this money to pay off other monthly bills, or you can use it as a down payment on a new or used car, truck or SUV since you won't be so worried about the price of gas. If you want to start the process today you can do so by filling out our online car loan application, and you could be driving home in your full-size pick-up tomorrow!

Cheap Gas and Your Car

Green Driving Habits Can Help Your Pocketbook & the Environment