If you’re no longer in an active bankruptcy, how it ended is important to your future ability to qualify for a car loan. 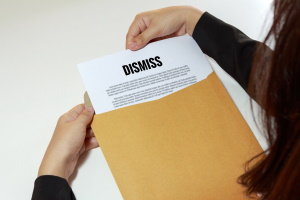 A dismissal and a discharge seem the same when it comes to ending a bankruptcy. However, they’re very different, and both come with different consequences and impacts on your ability to qualify for new credit.

A bankruptcy dismissal means your bankruptcy didn’t end on the best terms, but it could also mean you simply filed some paperwork incorrectly. Bankruptcies can be dismissed with or without prejudice.

If your bankruptcy was dismissed with prejudice, this means something didn’t go as planned. In some cases, a dismissal with prejudice means that you won't be allowed to refile for 180 days.

Common reasons for a bankruptcy dismissal with prejudice typically include:

If a bankruptcy was dismissed without prejudice, this usually means something was filed incorrectly, or something wasn’t submitted on time. If this was the case, you can refile right away and sort things out.

If your bankruptcy was discharged, that’s a good thing! It means you’ve successfully completed your bankruptcy. After a discharge, you can usually get an auto loan rather quickly.

Dismissal: Impact on Getting an Auto Loan

If your bankruptcy was dismissed with prejudice, you’ll find it difficult getting approved for a car loan, since a dismissal is considered a red flag to most lenders.

If you’re really in need of a vehicle after a bankruptcy dismissal, going through a buy here pay here (BHPH) dealership is probably what you should do. These dealers sell used cars, and the entire buying process is done at one location.

These car lots have in-house financing, which means the dealership you work with is also your lender. Since these dealers don’t rely on third-party lenders, they typically don’t review your credit reports when you apply for financing. This means a bankruptcy dismissal might not matter to a BHPH dealership. They do verify your income source, and typically require a down payment, which can be 20% or more of a vehicle’s selling price.

While the lack of a credit check is good news, BHPH lots tend to offer higher than average interest rates on their loans. These loans sometimes aren't reported to the credit reporting agencies, either. If the loan isn’t reported, your on-time payments won’t help improve your credit score after a bankruptcy. A BHPH dealer, however, is going to report missed or late payments and a repossession.

If you really need a car, a BHPH dealership could be a saving grace. After a time, your credit reports heal from negative marks, since most negative marks fall off your reports after seven years, except for a Chapter 7 bankruptcy, which stays on for up to 10 years.

Discharge: Impact on Getting an Auto Loan

Once you’ve completed your bankruptcy, getting an auto loan isn’t as difficult as you might think. While you may have a bankruptcy on your credit reports, it now appears as a discharge. If you’ve just been discharged, it may take a little while to appear on your reports, but it can be proven with your discharge papers.

Subprime auto lenders often work with post-bankruptcy borrowers, and use more than your credit score to make loan decisions, although they still review your credit reports. You also need some other items, such as computer-generated check stubs, a utility bill, a valid driver’s license, a list of personal references, and a down payment (cash or trade-in equity) in order to be considered for a car loan after bankruptcy.

Finding a subprime lender means locating a special finance dealership. These dealers are likely to have more options, vehicle-wise, including used, certified pre-owned (CPO), and possibly even affordable new cars that you may qualify for. Your personal situation dictates what you qualify for, but it's possible to get into a reliable vehicle after a bankruptcy discharge.

Finding a Dealership to Work With

After bankruptcy, working with the right lender for the job is key to get into your next auto loan. At Auto Credit Express, we can help you find the lending options you need.

We’ve created a network of special finance dealerships that spans the country. To get matched to a dealer near you, complete our free and secure car loan request form.

Buying a Car after Bankruptcy Dismissal in New York City

Financing a Car With a Dismissed Bankruptcy

How to Finance a Car After a Dismissed Bankruptcy

What Are My Auto Loan Options After a Bankruptcy Dismissal?

Car Dealers That Deal With Bankruptcies

How Soon Can I File for Chapter 7 Bankruptcy Again?

Getting a Car Loan after Chapter 13 Discharge

Can I Get an Auto Loan During Chapter 7 Bankruptcy?

When Can I File a Chapter 7 Bankruptcy Again?