What Does it Mean When a Vehicle Is Repossessed?

Having a car repossessed means it was taken away – and it’s not fun. Auto lenders have the ability to repo a vehicle if something goes awry. Here’s what you need to know about car repossessions.

What Is a Vehicle Repossession? 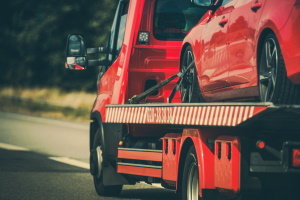 Repossession defined is a lender retaking possession of something that was financed. Repossessions aren’t limited to just vehicles, though, and they can be implemented and written in all sorts of loan contracts.

When a borrower takes on an auto loan, the lender fronts the cash to pay the dealer for the car. The borrower promises the lender to repay the amount, usually in the form of an installment auto loan with monthly payments.

If they stop making those payments, the lender can hire a recovery company to repossess the vehicle. Since the borrower hasn’t completed the loan, the lender has ownership rights. Their name is listed on the car’s title as “lienholder.”

The only way to remove a lien from a title is by paying off the loan. A borrower can either finish out the auto loan over time, or sell the vehicle for the loan amount and remove the lien. But until one of those things happens, if they stop making payments or break the loan contract in any other way, the lender has the right to repossess the car.

When it comes to vehicle repossessions, though, it usually happens because a borrower stops making payments and defaults on the loan. Another common reason for a repo is the borrower lapsed in their auto insurance coverage.

Auto lenders don’t repossess a car to “punish” the borrower for breaking the loan contract – they’re usually only doing it so they can resell the vehicle and try to make back whatever money they can.

What Happens to a Car After a Repo?

Most times, a repossessed car is prepped to be sold at an auction. This is done to try to cover the remaining auto loan balance.

After all is said and done, arguably the worst part of a repo (besides losing the car) is that there is a repossession listed on the borrower’s credit reports. Repos can lower a credit score, and most auto lenders don’t work with borrowers that have a repo less than a year old.

Over time, though, the impact of a repossession lessens. Most negative marks fall off of credit reports after seven years, including vehicle repos.

Getting Another Auto Loan After a Repossession

Since most traditional auto lenders don’t finance borrowers that have a recent repo, there are non-traditional car buying options to check out. There are dealerships that work with bad credit borrowers called buy here pay here (BHPH) used vehicle lots.

These dealers only sell used cars, but their financing is done in-house, so the dealership is also the lender. BHPH dealers don’t need to wait on another lender to approve the buyer for financing, which usually means skipping the credit check.

Borrowers with a repossession that’s less than a year old may be able to secure financing with one of these dealerships. However, credit repair sometimes isn’t on the table because these loans may not be reported to the credit bureaus.

For borrowers with a repo that’s over a year old, who still have a lower credit score, subprime auto loans may also be a good route. These auto lenders do review credit reports, but they take more than this into account to determine eligibility. Subprime lenders look at a borrower’s overall credit history, income, living stability, and many other factors.

They also report their car loans to the credit bureaus, so with on-time payments and careful management of the loan, there’s a chance for credit repair after a repo.

Not every dealer can finance a borrower that has a recent repossession. Finding one that does can feel like a wild goose chase, but it doesn’t have to be that way! Here at Auto Credit Express, we’ve created a nationwide network of dealerships that are signed up with bad credit lenders.

To get matched to a dealer in your local area that has the lending resources you need, fill out our free auto loan request form.

What Happens if the Repo Company Can’t Find My Car?

7 Things You Need to Know About Vehicle Repossession

How Will I Know My Car’s Getting Repossessed?

How the Repo Man Can Find Your Car

Buying Your Repo’d Car Back at Auction

7 Steps to Take After a Car Repossession

Consequences of Hiding Your Car From the Repo Man

Why Did My Credit Score Drop After a Repossession?

Recovering Your Car During Chapter 7 Bankruptcy