Should You Buy a Punched Vehicle?

If you see a listing for a late-model used car with crazy-low mileage (possibly 100-200 miles on the odometer), there is a good chance that you have stumbled upon a "punched" car. No, this vehicle hasn't been the victim of some guy practicing his Rocky moves, so it won't have a dented hood or a smashed windshield. Rather, a "punched" car is essentially a new car being sold as a used car.

And you can probably get a pretty good deal on one of these new-used vehicles. Just make sure that you are 100% sure of what you are getting before signing anything.

How a Punched Vehicle Happens 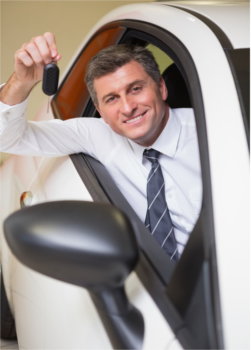 When it comes to sales, dealers have quotas to meet every month. They are also awarded with incentives from the manufacturers when they sell certain cars. So, sometimes on their own, but often at the request of a manufacturer, dealers will buy their own vehicles.

What happens to these cars once "purchased?" Obviously, they can't be sold again as new cars, so the dealer might put them to use as loaner vehicles or demos. After a couple months of light use, these cars are typically sold as used vehicles with ridiculously low mileage. Sometimes a dealer might even skip the loaner/demo phase and just immediately list the car as used.

Does a dealer lose a lot of money by "punching" cars? Not usually. The dealer will get all of the benefits attached to having inflated sales figures, monetary incentives from the manufacturers and some highly desirable "used" cars to sell or possibly lease. What can you get? If you can find a good deal on a "punched" vehicle, you will have the opportunity to purchase a practically new car at a used car price.

In 2015, there were apparently over 250,000 "punched" cars on the U.S. market, so there is a chance that you will be able to find these kinds of vehicles for sale in your area. They will probably be advertised as loaner cars or demo vehicles, and they will most likely be some sort of Kia, BMW, Nissan or a Fiat (the brands that are most frequently "punched"). If you decide to actively seek out one of these cars, just keep a few things in mind when you're shopping.

Even though you may get a very good deal on a "punched" car, it will still be more expensive than a regular used car. If you are in the process of repairing damaged credit, you will probably want to be on the lookout for a car that is a little older, but still in great shape.

There are several smart ways to save money with your car purchase. But you won't really get a good deal unless you get fair financing terms. And if you have bad credit, it can seem virtually impossible to get approved for an affordable auto loan. Luckily, Auto Credit Express can help. We can connect you with a local dealer who is qualified to handle unique credit situations.

All you have to do is fill out our fast, free and secure car loan request form to get started today.

Taking a Look at Your Payment to Income Ratio

Get a Car Loan with Horrible Credit

Should I Buy a Car That Was Leased?