Should I Buy a Car That Was Leased?

Buying a car that was previously leased could be a more affordable option for borrowers looking to save some money when they need to finance their next vehicle. If you’re considering a previously-leased car, here’s what we know.

If you’re shopping for a vehicle at a dealership, you may run into some cars that are just coming off lease. If a vehicle is just coming off of a lease, it’s likely that it’s only had one previous owner, has low mileage, and could only be two to three years old.

Lessees usually take decent care of their leased cars, too, because they’re meant to be returned later and sold as used. Lessees are often motivated to take good care of the leased car because they know it’s inspected upon return and they could have to pay extra money at the end of the lease if it’s returned in poor condition. A lessee that returns a vehicle with excessive wear and tear, damage, or goes over miles, is liable to be charged for it.

So this means that you specifically shop for a car that was previously leased, it’s likely to be gently used, probably cleaner than a regular used car, and likely to be much less expensive than its brand-new counterpart.

No matter what car you’re looking to purchase, you should always ask for a vehicle history report. Just because a car is just coming off lease, it doesn’t always mean that it was well-taken care of. You may also be able to get your hands on service records to see if the previous owner did regular maintenance such as oil changes. 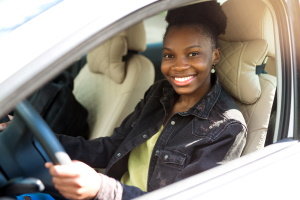 If you’re looking for a vehicle that was off-lease and comes with a warranty, a certified pre-owned (CPO) vehicle could be for you.

Often, vehicles that were recently returned are eligible for a manufacturer’s CPO program. CPO cars must be inspected by a manufacturer-certified mechanic, and meet a formidable list of stipulations. These usually include mileage limits, wear and tear limits, and age restrictions, and then they’re refurbished to be sold.

A regular used vehicle can also be a great option for borrowers looking for something affordable to finance. However, typical used cars don’t go through the same rigorous inspections that CPO ones do. In fact, they may just be looked over by the dealership’s in-house mechanic and then cleaned up a little for sale.

However, regular used vehicles are typically less expensive than a CPO. Because CPOs come with a warranty, are refurbished, and generally newer, they tend to come with a higher price tag. There may still be used cars that are just coming off lease that don’t quite meet CPO vehicle standards, though. It never hurts to ask a dealer if they have any previously-leased cars – which could mean a pretty decent deal on a gently used vehicle.

Are Previously-Leased Vehicles an Option for Bad Credit Borrowers?

CPO vehicles are only available for purchase from franchised dealerships. Mom-and-pop dealers can’t sell real CPOs, because they’re independent dealerships. This means that no-credit-check dealers wouldn’t be able to sell you a true CPO car.

However, if you apply for vehicle financing with a subprime lender that’s signed up with a special finance dealership, a previously-leased car that’s been deemed suitable as CPO could be within your reach.

Having poor credit can sometimes limit how much you can borrow from a lender. With a less than perfect credit score, it can be tough to get approved for an auto loan. But with our help at Auto Credit Express, we could help you find a dealership that’s signed up with lenders able to assist borrowers with credit challenges.

Get started by filling out our free auto loan request form and we’ll look for a dealer in your local area.

Why Is There a Security Deposit for Leased Cars?

When is a Good Time to Buy a CPO?