It’s that time of year again: the school year has begun – or is about to – for much of the US, so drivers, beware! That means heavier morning and afternoon traffic, and plenty of little ones making their own way to and from school.

At back to school time, it’s not uncommon to find that you’ve gotten used to your summer driving habits, so those flashing lights that indicate you’re in a school zone could catch you off guard. These lights typically run during morning arrival and afternoon dismissal times, but Erie Insurance urges drivers to pay attention at all times – even during the off hours. School zone indicators often get used for after school events such as sports practice or games, band practice, and other events. If you don’t pay attention, you could get ticketed, and in a school zone this could cost double the normal fines.

AAA also urges drivers to be extra cautious while driving, and reduce speeds in residential areas and school zones where children are walking or biking.

On the Roads Beyond the School

Slowing down and paying attention to your surroundings doesn’t only apply to the areas around a school. You should also be aware of school buses and know what their signals indicate: 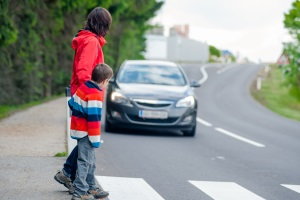 Besides knowing what to look for as a driver, it’s important that your school-aged children who ride the bus also know proper safety etiquette. According to AAA, if children ride the bus to or from school, they should follow these simple safety practices:

Pay Attention to Your Surroundings

Now is a perfect time to practice driving without distractions, and to set a good example for teens that may be behind the wheel soon. The Erie Insurance group recommends avoiding distractions like cell phones and other electronic devices while driving, and practice good driving habits. Come to complete stops, use your turn signals, don’t tailgate, and pay attention to the task at hand – driving. Leave plenty of room for kids to cross the street when they need to, and be prepared for traffic that stops more frequently. It’s a good idea to give yourself some extra time for your commute to make up for the heavier traffic that comes with the school year.

With school back in session, it’s important that you pay attention – both on and off the road. Be vigilant around school buses, school zones, and residential areas where children are present. The newest vehicles have great safety features, but they’re no substitute for simply paying attention to your surroundings. From everyone here at Auto Credit Express, have a great school year!

Hot Car Death: How to Prevent it from Happening