Can You Beat Depreciation?

Here's something that you probably already know: cars experience depreciation over time. In fact, depreciation is the single most expensive cost of owning a car, outweighing the combined costs of fuel, maintenance, and insurance. While any car that you buy will lose value over time, there is a way that you can minimize the impact of depreciation.

A Depreciation Loophole for Savvy Shoppers

Depreciation is a weird phenomenon that is hard to quantify because not all cars experience it at the same rate. It varies by: manufacturer, make, and model; the age, history, and condition of the vehicle in question; supply and demand in a location; consumer psychology; and market forces beyond our control.

Because of all of the factors in play, it may seem like there is nothing a consumer can do to offset deprecation. Not so fast. According to Edmunds, savvy car buyers can beat the depreciation curve by utilizing a loophole they dub the "Used-Car Sweet Spot."

How do you take advantage of this loophole? It's simple - (1) You buy a used vehicle that is one or two years old, (2) you drive and own it for three or four years, and then (3) you sell or trade it in around the fifth or sixth year of its life. 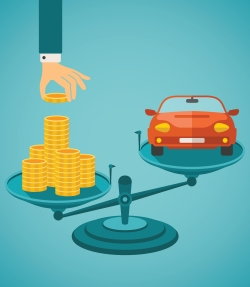 Here's how these three steps help you "beat," or rather offset, depreciation:

The depreciation rate of a vehicle may vary based on a variety of factors, but car buyers can still get ahead of the curve by following this plan.

Don't Despair if you Need a Car but have Bad Credit

Edmunds' loophole ties perfectly into the advice that we here at Auto Credit Express always give to potential buyers with damaged credit. We urge credit-challenged buyers to: (1) choose an affordable car, (2) make a down payment (the higher, the better), and (3) keep the term as short as possible. If you follow Edmunds plan and our advice, you stand to minimize the cost of your auto loan and the effects of depreciation all at once.

And if you are having trouble getting approved for financing, Auto Credit Express help. We can help you get connected to the dealership in your area that stands to give you your best shot at auto loan approval. All you need to do to get started is complete our 100% free and secure online application. The sooner you apply, the sooner you could be driving off the lot in your next car.

How to Calculate Your Car’s Depreciation Rate

GAP Insurance Can Be a Wallet Saver

Ways to Minimize the Impact of Depreciation

How to Maintain Equity in Your Vehicle

Help Avoid Negative Equity in a Car with a Down Payment

How Negative Equity Can Happen on a Car Loan

Which Vehicles Have High Resale Value?

When Is the Best Time to Trade in a Car?

Why You Should NOT Buy a New Car With Bad Credit