The roads are about to get a whole lot safer. One week after 20 automakers pledged to make automatic emergency braking standard on all new vehicles by 2022, Toyota announced it would accomplish this feat by the end of 2017. 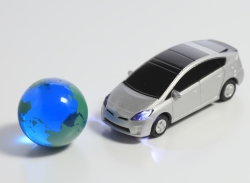 On March 17, 2016, 20 major automakers agreed to make automatic braking and pre-collision warning standard on all new vehicles by September of 2022. These automakers represent 99% of the U.S. automotive market, so this pledge basically makes the safety feature a nationally available system. The agreement came at the behest of U.S. safety regulators - the National Highway Traffic Safety Administration (NHTSA) and the Insurance Institute for Highway Safety (IIHS).

Now, Toyota is raising the bar for both it and its Lexus brand. The Japanese automobile manufacturer announced that it will be making automatic emergency braking (AEB) standard on nearly all of its new vehicles by the end of 2017. This pledge would put Toyota nearly five years ahead of the industry agreed-upon benchmark. Talk about getting ahead of the curve.

To accomplish this feat, Toyota is tweaking their existing safety feature packages. Both Toyota and Lexus already offer AEB on certain makes and models, but you generally have to purchase the optional safety packages (Toyota Safety Sense and Lexus Safety System +) to obtain it. By the end of 2017, both of these packages will come standard (and with more safety features) on 25 out of 30 vehicles in their lineup.

How Effective is Automatic Emergency Braking?

Automatic emergency braking is a vehicle safety feature that uses radar, laser beams, and/or cameras to detect objects in a vehicle's path. The majority of these systems alert the driver of an impending collision with an audible or visual warning, and they will engage the brakes automatically if the driver fails to react quickly enough.

AEB was once reserved for only the most expensive vehicles. While it has grown in availability in recent years, it is hardly ever standard and is often bundled into expensive option packages. Toyota's pledge - along with the other 19 automakers who agreed to do the same later - is changing all of this. In the coming years, AEB systems will be readily available for people across all income tiers.

All indicators and early data suggest that AEB makes a big difference and can have a gigantic impact on road safety. This technology either prevents a crash from happening in the first place, or greatly reduces the severity of any that do occur. A reduction in crashes (and the severity of crashes) will inherently lead to fewer injuries and fatalities on the road. The early numbers speak for themselves:

The news of this pledge comes at an opportune time. Motor vehicle deaths rose 8% in 2015 over 2014, according to estimates from the National Safety Council (NSC). The NSC estimates that 38,300 people were killed on the roads in 2015, making it the deadliest driving year since 2008. Safety regulators believe that AEB systems can significantly reduce numbers like these.

A Win for the Consumer

There is no question that this news equates to a win for the consumer. The roads, your car, your passengers and you are all set to be much safer once AEB systems are implemented on the majority of vehicles.

There are other benefits to consider as well:

Standard automatic emergency braking on all new vehicles in the United States is on the horizon, and it appears that we will all benefit from this advanced safety technology.

When You Need Financing Fast

Speaking of help for the consumer, Auto Credit Express gives consumers with poor credit their best opportunity to get approved for auto financing. If you have less than perfect credit and need an auto loan, we can help. To begin the process, all you need to do is fill out our completely free and secure online application.