The Best Deal is Not Always Affordable

Each and every month, Kelley Blue Book's publishes a list of the "10-Best New-Car Deals." But for the most part, the vehicles that find their way onto these lists are beyond the budgets of most credit-challenged buyers. That's pretty much to be expected, as manufacturers are more able to offer larger discounts on more expensive vehicles than they are on lower-priced ones.

Compounding the problem is the fact that half of these monthly "best deals" are leases – a type of new car financing that credit-challenged buyers rarely qualify for.

But even after putting aside the list of lease specials and slicing and dicing the latest cash back financing deals, we were able to come up with two vehicles from kbb.com's February, 2016 list that could work for many buyers with poor credit. Both financing deals feature vehicles that, after the incentives have been applied, have a Manufacturer's Suggested Retail Price (MSRP) of well under $20,000. Here they are along with comments from the staff at kbb.com:

"With this being a leap year, there is one extra selling day in February, meaning one more day this month that shoppers can get a great deal on a new car," said Jack R. Nerad, executive editorial director and executive market analyst for Kelley Blue Book's KBB.com. "Dealers are still trying to close out many remaining 2015 model-year new vehicles on their lots now that we are into the second month of the year, so the deals on 2015 models abound."

kbb.com's take: "The Dodge Dart is a sporty, roomy compact sedan that offers one of our favorite infotainment offerings in the Uconnect system." 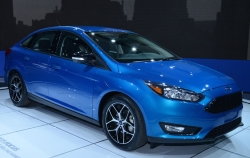 kbb.com's take: "With a design strongly influenced by Ford of Europe, the Ford Focus offers the kind of engaging driving dynamics American drivers have long envied. And $3,000 cash back makes it even more appealing."

Despite the fact that the Ford Focus SE and Dodge Dart SXT are 2015 new car models, which means they are probably in short supply, both represent good picks and should be well within the budgets of many credit-challenged buyers.

Here's another good pick: At no charge to you, Auto Credit Express can help you in the all-important search to find a dealer that can offer you your best opportunity for a new car loan approval.

So if you're ready to take that step, you can begin by filling out our online car loan application.

How to Buy a New Car with Poor Credit