Automotive recalls can cost you a lot of time when you have to get your vehicle repaired. Even after they're completed, there is no guarantee that you will not have to make a return trip to the dealership if another recall is issued. This can make automotive recall rates a key issue when you are in the market for your next vehicle.

A study from iSeeCars.com has recently uncovered new information regarding automotive recalls. It has identified which manufacturers had the highest and lowest recall rates over a 31 year period. Additionally, the company uncovered the car makers that are the most and least proactive when issuing these notices.

After analyzing data from January 1985 to September 2016, iSeeCars.com found that Porsche had the lowest recall rate among major manufacturers. Data from new vehicle sales and the National Highway Transportation Safety Administration (NHTSA) showed that Porsche only recalled 531 cars for every 1,000 cars sold. This number falls well below the industry average of 1,115, a figure that is produced when vehicles are recalled more than once.

The data also identified Volkswagen as having the most recalls during the same time period. Volkswagen recalled over 1,800 vehicles for every 1,000 sold. This figure doesn't even factor in the recalls of the diesel cars affected by their emissions scandal. These have yet to be issued, meaning that it will be significantly higher when more recent data is factored in. 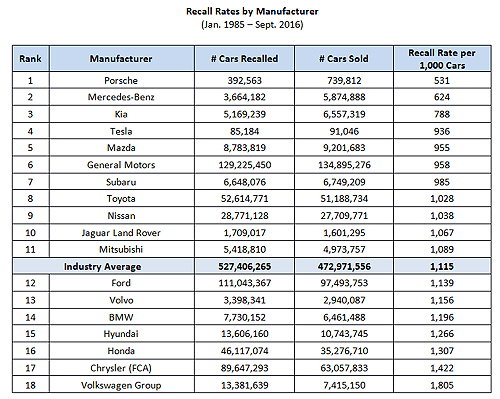 Most and Least Proactive Manufacturers

While recalls can be difficult for both consumers and manufacturers, they often keep motorists safer on the road. This makes it very important for car makers to proactively identify issues before major problems occur. Data from the iSeeCars.com study shows that Tesla scored the highest, while Ford was the worst in this category.

Tesla lead the way in recall proactiveness, as the manufacturer was the best at identifying problems with its cars and initiating recalls within a three-year period. It scored at 100% in manufacturer-initiated recall campaigns, which exceeds the industry average of 46.1%. This means that Tesla has strong internal systems in place to identify issues even before the NHTSA does.

In contrast, Ford had the lowest manufacturer-initiated recall campaign rate of 29.6%. This was 16.5% below the industry average. NHTSA investigations accounted for over 70% of the recalls that Ford issued in 31 years.

Another factor that the iSeeCars.com study measured was recall timeliness. This means how quickly car manufacturers address recalls internally. GM scored the best in this category for major manufacturers, with 74.7%. Mazda scored the lowest at 48.4%.

While consumers may find the timeliness rankings interesting, they may have been skewed by recent recalls that have affected older vehicles. For example, Mazda ranks the worst, in part, due to an ignition recall in 2015 that affected vehicles up to 20 years old.

Drive a Vehicle with Fewer Recalls

Are you tired of driving a vehicle that has had several different recalls? Begin the process of shopping for another car with Auto Credit Express.

We will assist you by matching you with a dealership that can potentially improve your situation, even if you are dealing with credit issues. Just apply online and we will be in contact with you soon.

Most Reliable Used Cars with the Fewest Recalls

Why You Shouldn't Neglect a Safety Recall Notice on Your Car

The Importance Of Addressing Recalls

Is Your Vehicle Part of the Takata Airbag Recall?

Buying a Car with a Recall