How Safe Are Your Headlights?

The bad news is that the headlights on your car may not be as effective as you think they are. However, the good news is that you might be able to cancel that optometrist appointment.

A recent study conducted by the Insurance Institute for Highway Safety (IIHS) has revealed that many new cars are equipped with acceptable, marginal and even poorly rated headlight systems. The really surprising thing is that several of the vehicles with inadequate headlights are classified as luxury vehicles.

According to David Zuby, IIHS executive vice president and chief research officer, "If you're having trouble seeing behind the wheel at night, it could very well be your headlights and not your eyes that are to blame." 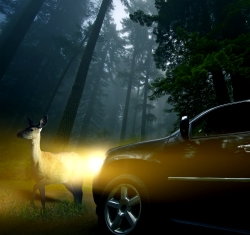 The Importance of Vehicle Headlights

Obviously, it is necessary for your car to have headlights and taillights so that you can see and be seen while driving at night. And because of the potential hazards involved with operating a motor vehicle, auto makers have realized that simply having two glorified flashlights attached to the front of a car just isn't enough. It has been determined that about half of all traffic-related deaths occur either in the dark or in dawn or dusk conditions. So, improved headlights will lead to more lives being saved.

Of course, you might think that if you are buying a brand new car with good safety ratings and all of the latest technology features, you will also be getting a lighting system that performs perfectly. However, if the findings from this IIHS study are accurate, this is, unfortunately, not the case.

In this study, 31 midsize cars were evaluated and rated for headlight performance. Because vehicles with different trim levels sometimes come with different headlights, there were a total of 82 ratings for these 2016 models.

After all possible lighting systems on all of the selected vehicles were carefully evaluated, only one car was judged to have "good" headlights: The Toyota Prius v.

Out of 82 ratings, there was only one "good" score, but it actually gets worse. The Prius v only earned a good rating when equipped with LED lights and high-beam assist. And in order to get these particular headlights, a customer must purchase the advanced technology package, which is only available on the highest trim level. When only equipped with regular halogen lights and without high-beam assist, the Prius v earned a "poor" rating.

Here are the rankings for the other cars tested with the best available headlight system for each model:

Out of the headlight systems that earned a poor rating, the halogen lights on the BMW 3 series were rated the absolute worst. A driver with these headlights would apparently have to be going 35 mph or slower to stop in time to avoid an obstacle in the travel lane. The same car was tested with the LED curve-adaptive system with high-beam assist option and earned a marginal rating.

BMW has responded to these findings from IIHS with the following statement to CBS News:

"The BMW Group has been an industry leader for headlight technology innovation for more than four decades. BMW was the first to introduce ellipsoid projector headlights, electronic adaptive headlight technology, xenon headlights and, most recently, BMW Laserlights. BMW has also pioneered Night Vision systems that can detect animals and pedestrians far beyond the range of the best headlight systems. While we are disappointed with the results of the IIHS headlight test of a BMW3 Series equipped with basic halogen headlights, we remain confident that we offer our customers very effective headlight systems at a variety of price points."

It seems that even though lighting technology has advanced significantly in recent years, auto manufacturers still have a long way to go before they can claim that their lighting systems are capable of keeping all drivers safe at all times and in all conditions.

Affordable Financing: A Light in the Tunnel

If you need to buy a new or used car, truck, van, or SUV, but are dealing with bad credit, you may not be getting a clear view of a positive outcome. How will you get a fair deal on your financing? Allow Auto Credit Express to illuminate your path to an easy and hassle-free vehicle buying experience. No matter what shape your credit is in, we can connect you with a dealer in your area who is qualified and willing to work with your situation.

All you have to do is fill out our fast and secure online application to get started today.

And if you are currently in the process of repairing your damaged credit, click here for information about the best ways to fix your credit report and get back on the road to financial success.