You Wanted a Cherry Car, Instead You Got a Lemon

What is our obsession with using fruit to describe things in the world? You can compare apples to apples or apples to oranges, and cars in great condition are considered cherry. Let’s not forget the lemon. There seems to be no solid explanation of exactly when people began referring to bad cars as “lemons”, but we all know why. Lemons are sour, they leave a bad taste in your mouth, and, as far as cars go, no one wants one.

According to a survey conducted by YourMechanic, over two-thirds of lemon cars begin to show symptoms within the first month of ownership. Of those reported lemons, 65 percent were purchased from a dealership. Seeing the results, it makes a clear argument for the importance of a pre-purchase inspection—no matter where you buy your vehicle.

What Makes a Lemon 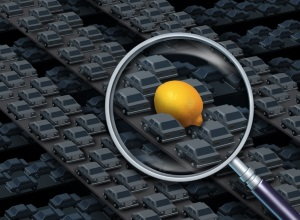 According to usa.gov, a car is considered a “lemon” when it is determined that a vehicle is defective beyond repair. These defects must be substantial, affecting the actual operation of the car. Things such as ignition, brakes, transmission, engine and other major parts may qualify a vehicle as a lemon.

In their survey, YourMechanic found that the most common reported problem was brakes. Additional parts frequently causing issues were the starter, suspension system, engine and radiator.

The survey also found that:

Check Before You Buy

Whether you are purchasing a new or used car, it is important to know what you are getting. If you are purchasing a used vehicle, have a certified mechanic inspect the car before you buy. According to Edmunds, this is the most often ignored piece of car-buying advice. When it comes to buying a used car, this inspection can save you time, money, and hassle down the road.

In a separate study, YourMechanic asked consumers who had recently purchased a used car if they had an inspection done before their purchase. 72 percent reported they did not, while 76 percent noted they did not know third-party services were available for pre-purchase inspections.

It is recommended that you have a potential purchase inspected by a mechanic you trust. You should not only find out what is wrong, but also what is right with the vehicle. Have them verify the equipment or options, confirm the condition level, check the body and frame for hidden damages and code the engine.

You can purchase with confidence if the inspection report is clean, or renegotiate or walk away if it is not. Most sellers will let the vehicle be inspected, either at a shop, or at their home, if it is a private party sale. Be wary if a seller refuses.

In the U.S., each state has their own “lemon laws” to help consumers who get stuck with defective cars. According to Nolo.com, an estimated 150,000 new cars each year are lemons. In order to take advantage of the laws that are in place, under most states, a car must (1) have a substantial defect covered by a warranty that occurred within a certain time frame or mileage amount; and (2) not be repaired after a reasonable number of attempts at doing so.

Usually, these lemon laws only apply to new vehicles. However, some states are adopting used-car lemon laws, while several others require used cars to be sold with warranties that provide limited protection. According to usa.gov, you can check with your state’s consumer protection office to find out if used cars are covered in your state.

Don’t be stuck with a sour buy if you got a lemon. Let Auto Credit Express help you move toward your next vehicle purchase with confidence. We match people with credit challenges to one of the dealers in our network. They have lenders in place prepared to deal with many types of credit situations. Take your first step by filling out our online auto loan request form now. As always, there is no cost or obligation.

Did You Buy a Lemon?

Are Lemon Laws the Same In Every State?

What Does Lemon Law Buyback Mean?

Can I Return the Car I Just Financed?

Pros and Cons of Buying a Car Online