Rebuilt titles can catch a car buyer’s eye. These vehicles are usually less expensive than their clean title counterparts, so there’s potential for saving lots of cash. However, you should be wary of a car with a rebuilt title. Here’s why.

The Difference Between Rebuilt and Clean Titles

A vehicle’s title contains lots of helpful information that can tell you its year, make, model, and sometimes even the mileage on the car when it was last sold. Titles can also tell you about past events that the vehicle has gone through, like an accident or flood.

When a car is deemed a total loss, or has major damage that renders it unsafe to drive, its title gets branded to let people know what it’s gone through. Vehicles without major incidents, on the other hand, have clean titles.

There are many different branded titles, and the names can vary depending on what state the car is from. A few more examples include: flood, junk, bonded, fleet, lemon, and reconstructed. A few of the most commonly seen title brands are:

If a car is deemed a total loss, it goes from having a clean title to a salvage title. If someone decides to restore and fix a salvaged vehicle, it must pass an inspection before it can be rebranded as rebuilt. If you see a car with anything on the title, take a second to consider the risks before you take out your wallet.

Rethink Buying a Car With a Rebuilt Title 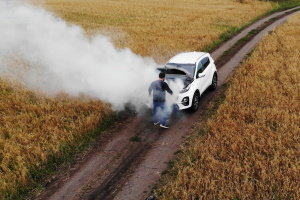 As a general rule, don’t count on franchised dealerships selling (or buying) vehicles with rebuilt or reconstructed titles. You’re most likely to see rebuilt titles for sale at mom-and-pop car shops, or from private sellers.

Finding an auto lender that’s willing to finance a rebuilt title, or any kind of branded title, is going to be difficult. Lenders often don’t want to take the chance because of the risk of financing a vehicle that’s already seen extensive damage or has a history of problems.

For some car buyers, financing may not even be necessary because rebuilt vehicles are typically much cheaper than those with a clean title. You can expect a rebuilt car’s title to be worth around 30% to 40% less than its clean title counterpart.

The potential savings that come with purchasing a vehicle with a rebuilt title may sound like a great idea – until you consider the possible long-term side effects and costs, that is.

Imagine dropping a ceramic plate. You can glue it back together to return it to its original shape, but the integrity of the plate is compromised and you can still see the cracks. The same can be true for a car that holds a rebuilt title.

While a rebuilt title vehicle may have been refurbished, inspected, and deemed drivable, this doesn’t mean that it's in exactly the same shape as it was before.

Consider a Used or CPO Vehicle Instead

Since most auto lenders don’t finance cars with rebuilt titles, you’re likely to need to pay for the vehicle in cash or arrange something with the seller themselves. Instead of risking it with a car that’s seen better days, it’s generally recommended that you steer clear of any vehicles with branded titles – even rebuilt ones.

If you’re in need of something more affordable, consider a used car with a clean title. You should still do an inspection and make sure everything is shipshape, though. A vehicle with a clean title usually has more value in the long run, and is less likely to give you issues in the future.

For even more peace of mind, you could consider a certified pre-owned (CPO) car over a standard used vehicle. CPOs are sold at dealerships, and many are typically just coming off lease, meaning they’ve only had one previous owner.

These cars are inspected by a manufacturer-certified mechanic, and they come with some type of manufacturer-backed warranty. Some CPO vehicles are even still covered under their original manufacturer warranty since they’re generally under five years old with less than 75,000 miles.

If you think you can’t get financing because you have a lower credit score, think again.

You have more car options than you think, even with a tight budget and lower credit score. Considering a vehicle with a rebuilt title could mean costly repairs down the line, and possibly driving a car that isn’t as safe as it should be.

If you’re struggling to find the right vehicle and auto lender for your situation, you’re in the right place. Here at Auto Credit Express, we match bad credit borrowers to dealerships in their local area with the lending options they need for their unique situation. Get started now by filling out our free car loan request form.

What to Know About Buying a Car with a Rebuilt Title