When you’re thinking about buying a car, it’s no secret there are a lot of facts to consider. Not only do you need to think about the vehicle itself - makes and models that fit your needs - you also need to consider the cost of ownership. These things—fuel, repair costs, and perhaps most important, insurance—often get overlooked in the initial stages of the car buying process.

Here, we will look more closely at some of the things that could impact your auto insurance. These surprising things not only factor into costs, but should be considered in your total car buying process as well.

Where You Live Impacts Cost

According to Insure.com, the average cost of car insurance for 2017 is $1,318, annually, in the U.S. The site ranks car insurance by state on a yearly basis, and notes that insurance rates range drastically between the most and least expensive. For the fourth year in a row, Michigan tops the charts for highest auto insurance premiums, while Maine grabbed this year’s top slot as most affordable state.

The wide range of averages is not surprising, with location being a top factor in determining car insurance rates in general. People in urban areas tend to see higher car insurance costs because of the increased risk of damage from accidents, vandalism and theft. Not only will these increased claims factor in, but the number of uninsured drivers in the area you live or work in could raise your rates as well.

What You Drive Can Raise Rates 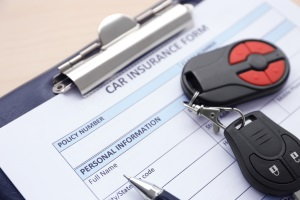 Perhaps least surprising, is that the vehicle you drive will be a deciding factor for how much you pay for insurance. This is, in part, due to your vehicle’s safety rating. Insurance companies often analyze data from consumer claims and industry safety reports to see which vehicles pose the least risk. Vehicles with a poor safety rating and those considered “flashy” or dangerous can cause a rate hike on your end.

The same can be said for cars that are often stolen. A vehicle’s popularity can make them more desirable to car thieves, and remember: increased claims equal increased cost. Another factor is often not what you drive, but how far you drive. In theory, the more you drive your car the more your chance for accidents increases. So, regardless of how safe a driver you are, the more miles you rack up behind the wheel, the more your insurance premiums could go up.

One sure fire way to rack up some extra costs is with traffic tickets. Not only will you have to pay the fine, but a record of repeat offenses can drive up your insurance rates, as well. One ticket probably won’t raise your rates, but getting multiple speeding tickets over the course of one or two years may not look so good to your provider. Also, violations that involve risky driving habits are more likely to reflect on your bill.

According to carinsurance.com, these tickets will put a bump in your insurance rates:

Studies conducted by the National Center for Biotechnology Information (NCBI) have linked higher education levels to a lower rate of car accidents. Other studies have also found this to be true, showing a number of insurance companies often charge higher premiums to less educated drivers because they pose a higher likelihood of being in an accident.

On a similar note, your occupation may be taken into account when you are shopping for insurance. Jobs that give the impression of a cautious, detail oriented person—scientists, officers of the law, teachers, and clergy, for example—tend to see lower rates than drivers who hold high stress jobs. Higher rates are also often issued for occupations that put you on the road more frequently, such as delivery drivers.

Lower auto insurance rates are not a good reason to tie the knot—but they may be a perk to getting married, nonetheless. Research shows married drivers are involved in accidents less than their single peers, according to a Consumer Federation of America (CFA) study. They are also more likely to get a break on their rate, because married people tend to drive more responsibly.

That pesky little number known as a credit score can strike at any time, including shopping for insurance rates. If you have bad credit, chances are your insurance company has reflected this in your rate. In most states, insurance companies can use your credit score to predict future insurance claims and risk. In fact, it is such a common practice that only three states—Massachusetts, Hawaii and California—have banned this practice.

Bad credit not only affects your insurance rates, it will also take its toll on your car buying experience as a whole. This is where Auto Credit Express can help. Our network of experienced special finance dealers has the resources to help people in challenging and bad credit situations. Take the first step today by filling out our online auto loan request form. It’s free of cost and obligation, so get started now!

Impacts on Cost of Vehicle Insurance

Can You Drive Someone Else's Car Regularly?

What You Should Know about Car Insurance

Can You Be Refused Car Insurance for Bad Credit?

How a Speeding Ticket May Affect Your Insurance Premium

How to Pay Less for Car Insurance

How to Save Money on Your Auto Insurance