With both new and used car prices on the rise, many people may be contemplating keeping their current car as long as possible. Not all vehicles can reliably make it to a ripe old age, but some vehicles are built to last. The latest study from iSeeCars of longest-lasting cars reveals that Toyota leads the pack when it comes to vehicles that can last over 200,000 miles.

Reliable car brands. Having a reliable vehicle is important because they're longer lasting and easier to sell or trade-in than cars that aren't known to run for as long. Reliability also means spending less time in the shop and hitting benchmarks that leave other vehicles in the dust.

When shopping for a used car one of the deciding factors for many consumers is mileage. The standard adage has always been to find a car with under 100,000 miles on it. But sometimes those are hard to find. It's important to know which brands are known to last and may be worth considering.

iSeeCars did a study of the longest-lasting cars and found that Toyota topped the charts, taking six of 10 spots for vehicles that can last to 200,000 miles and beyond. Of the vehicles surveyed, Toyota had 2.3% of vehicles reaching beyond that benchmark. Next in line was Honda, with 1.9% of cars hitting 200K, then GMC, Chevrolet, and Ford with 1.8%, 1.6%, and 1.2%, respectively. 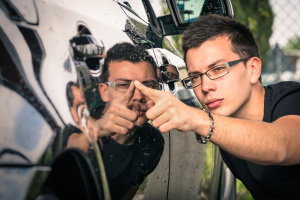 As is evident from the study, full-sized SUVs and trucks make for the longest-lasting vehicles, but there are still a few options for sedan and hybrid shoppers that made the list – all Toyota's. The Avalon, Prius, and Highlander Hybrid all made the list of cars that can last past 200,000 miles.

Pros and Cons of high-mileage cars. Cars that are on the road well past others tend to need a few major repairs along the way, with some parts wearing out long before the engine. Don't forget that you may also need to put some special care into the car to keep it running into its later years. High-mileage fluids can add to the cost of caring for your vehicle, and bigger, older cars tend to be less fuel-efficient.

But, since a vehicle that has high mileage may not be as desirable, it could be priced to sell. Additionally, if you're planning to drive the car until the wheels fall off, getting a car that goes past 200,000 miles can be a big plus. Also having a car that costs less can mean savings in insurance costs, too.

Beware of financing limitations. However, when you're buying a used car in this situation, you may find limitations on vehicles that can be financed. As a bad credit borrower, you're typically limited in the condition of the car you can finance – this usually means vehicles with under 100,000 miles on them. Lenders don't tend to approve loans for older cars, either, since they pose more of a mechanical risk of breakdown before you're finished paying for them. This could lead to loan default, which is no good for anyone involved.