If you grew up in the US and got bored during long car rides, you may have played punch buggy to pass the time. It’s a classic car-trip game where when you see a Volkswagen Beetle, you shout “Punch buggy! No punch backs!” and playfully punch your sibling or friend on the arm. Well, the days of playing punch buggy could be coming to an end.

Saying Goodbye to the VW Beetle

Unfortunately, Volkswagen has announced that they’re ending production of the Beetle in 2019. The VW Beetle has been “The People’s Car” since the mid-1930s, and became a huge success in the US between 1960 and 1965. Since then, the Beetle has declined in popularity and sales – even with a newly designed Beetle that came to market in 1998.

Even though the Beetle won’t be produced anymore, that doesn’t you won’t be able to buy one. In fact, now could be the best time to purchase a VW Beetle – new or used.

While a new 2017 or 2018 VW Beetle can cost anywhere from $20,000 to $34,000, you don’t necessarily need to buy new to get a great Bug. Using a car buying checklist, you can determine what a used Beetle has and doesn’t have. You need to check the exterior and interior for any noticeable damage or wear and tear, test drive it, and have a mechanic inspect it before you sign the paperwork.

In addition to the checklist, you should do some research on the specific make and model you’re looking into. What’s its reliability rating? What’s the fuel economy? What’s a fair price point? Does it have any common issues that may need repairing? Knowing these specifics ahead of time gives you an idea on what kind of vehicle you’re financing and any potential repairs you need to have done.

If you’re considering a used VW Beetle and want a glimpse at what some older models look like, here are four used models to consider: 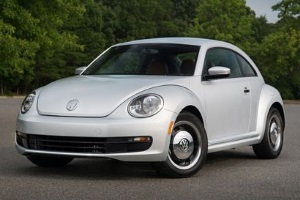 Looking to Buy a Used Beetle?

If the VW Beetle holds a special place in your heart but your credit is less than perfect, you may be wondering just how you can buy one. While we can’t promise you can finance a Beetle, we can help you find a dealer who can help you get behind the wheel.

At Auto Credit Express, we work with a coast-to-coast network of dealerships with special finance lenders available to work with people dealing with challenging credit situations. Getting the process started is simple. Simply complete our auto loan request form and we’ll get to work matching you with a dealer in your area.

What to Do When Your Car Has a Pesky Pest Problem

Best Discounts on Cars for College Students and Grads