Take Brad, for example. Brad is a single 31-year-old who lives in Indianapolis. He works full time as a bartender at a popular nighttime spot in Indy, so he reports a steady $1,800 a month. However, he's only been working there for three months.

Brad just moved to a great apartment that's cheaper than his old place, but it's far from work. Now, he needs reliable transportation to get to and from his job because Indianapolis isn't exactly walk-friendly. Plus, the public transportation systems stop running long before he gets out of work most nights.

However, Brad has a 550 credit score. A history of late payments has kept his score down over the years. This is a problem because he wants to finance a vehicle because he knows a car loan can help improve his credit.

Brad can't get approved at his bank with his poor credit, so he applies for a bad credit auto loan. He knows that he meets the typical requirements for most subprime lenders, including a minimum monthly income of at least $1,500 before taxes are taken out.

Unfortunately, he is still turned down for a loan. He can't figure out why, but we can identify three possible reasons why this may have happened:

Brad was determined to figure out why his application was rejected. So, he began to research all about bad credit auto loans and subprime lender requirements on the Auto Credit Express blog. 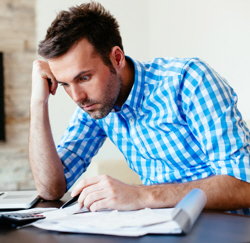 Brad's 550 credit score is going to make it more difficult to get approved for auto financing. And he'll receive a higher than average interest rate if he is approved. This is because lenders view his low credit score as a higher risk.

Brad's credit also suffers because of a history of late payments. Late payments can stay on a credit report for up to seven years from the day they are reported. All of Brad's accounts are current now, but he's got a 90-day late mark from three years ago and two 60-day late accounts from just over two years ago.

Multiple negative marks like this make him seem riskier to lenders. Your payment history is the single most important factor in determining your credit score. Plus, lenders hate to see payments that are 90 days late or more, regardless of whether or not the account is current.

After reading up on how late payments affect credit, Brad doesn't think that this is the main reason why his application was denied. Yet, he also admits that it certainly isn't helping matters, either.

Time on the Job and Subprime Lenders

Employment history, job stability, and time on the job are all important factors that subprime lenders look into. The typical requirements that the applicant needs to meet include:

Again, different lenders will have different rules, but these are general starting off points.

Lenders like to see a longer time on the job because it allows them to verify an applicant's actual income level over time. This is especially true for hourly employees. Also, as a general rule, lenders don’t want to see any long gaps (60+ days) between jobs. They understand that people sometimes switch jobs, so they don't mind if you are unemployed for a short amount of time. They also like it when applicants have lived in the same geographic area for an extended period of time.

Brad was able to learn all of this by reading up on job stability and lender rules on the Auto Credit Express blog. And it turns out, he checks out in these areas.

Brad has lived in Indianapolis for five years. And while he's only been at his current job for three months, he works full time and can prove that he's been consistently employed in the area for the past five years. It's likely that lenders will not take issue with his short amount of time on the job because of that steady employment history.

Working as a bartender, Brad gets a lot of tips. And, as many other people with tip income do, he doesn't report all of them on his tax returns. While illegal, he does this to pay less on his income taxes.

When Brad read up on subprime lender income requirements, he realized that his practice of not reporting all of his tip income was killing his approval chances. Here's why.

Brad learned that lenders calculate something known as a debt-to-income (DTI) ratio. They add up your monthly expenses and divide that number by your total monthly income. This lets them see how much of your income is already budgeted to other expenses. Subprime lenders don't want your DTI ratio to top 50%.

Bingo! You see, subprime lenders will only look at your documented income when evaluating an applicant. They need to see it stated on your yearly W-2 wage and tax statement or a professionally prepared income tax return. Brad reports an income of $1,800 a month, but he's actually bringing home over $2,400 a month with tips.

This practice is throwing his DTI ratio off. To Brad, he was doing just fine and even saving money every month. To lenders, it looked like Brad was already using up nearly half his monthly income to cover his expenses. He didn't meet their DTI requirement and, therefore, didn't qualify.

Brad learned it's best to start reporting all of his tip income. Otherwise, it becomes extremely difficult to get approved for loans, a mortgage, or even credit cards. He used the IRS' website to learn how to report all of his tips:

Brad corrected his mistake. He started accurately reporting his tips to make sure he could show a qualifying income. In a year's time, he was able to get approved for an auto loan by applying with Auto Credit Express.

We hope that Brad's story shows you just how carefully applicants are evaluated by subprime auto lenders. Just remember that everybody's situation is different, and that many factors are going to be considered.

One final tip: Auto Credit Express specializes in helping people in unique credit situations like Brad find auto financing. We'll match you with a dealership in your area that stands to give you the best shot at getting approved. Go ahead and fill out our free and easy online application to get started today.