Going green is a familiar term these days. It brings to mind recycling, caring for the planet, and alternative energy. When it comes to using alternative energy sources, many in the automotive industry are on board and ready to keep pushing eco-friendly vehicles that use fewer fossil fuels and leave a smaller carbon footprint.

Green vehicles have seen their share of ups and downs in their time on the market. Right now, they are making a comeback. According to new data from Edmunds, green vehicle sales are up—after a three-year slide—showing 21.5 percent growth compared to the first half of last year. This is due in part to more automakers embracing consumers’ love affair with trucks and SUVs, adding larger vehicles to their lineup of green models. In fact, light trucks make up 22.9 percent of today’s green vehicle market.

Eco-friendly, alternative fuel, and electric cars have been on the market for quite some time now, all the while automakers have been working hard to perfect the technology of their choosing.

Have a look at some of the green vehicles of today:

These cars are fueled with gasoline, but use battery powered motors to improve fuel efficiency. These cars are good for city driving, cutting down on emissions by switching the engine off when the vehicle is standing still and using battery-electric power in low-speed driving. They also don’t require their buyers to make any lifestyle changes to own or operate them, making hybrids a great option for those who want better fuel economy. 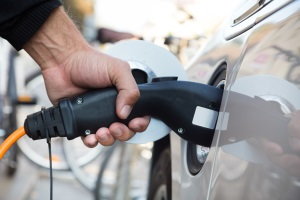 PHEVs are hybrid vehicles with a high-capacity battery which is charged by plugging it into an electrical outlet or a charging station. These cars can run as gas only, electric only, or a combination of both. They have the ability to go further on their battery than an all-electric vehicle, and only require some slight lifestyle adjustments—like learning to remember to plug-in your car. Because these cars can operate as gasoline-only, they will still run if they don’t get plugged in, they just won’t max out their fuel economy.

The all-electric vehicles that run on battery power alone are among the most eco-friendly. They have zero emissions, as they have no gas engine. These cars are quiet, and typically smooth to drive. Though their range has improved in recent years, it can still be a limitation. These cars are generally well suited as daily-drivers for those who don’t travel great distances. You do have to remember to plug-in though—either at home, or on the road at a charging station.

Hydrogen fuel cell cars continue to grow in the consumer market this year, with both Toyota and Honda putting out new 2017 models. These vehicles use the chemical reaction between hydrogen and oxygen in a fuel cell to power an electric motor and emit only water out the tailpipe. These zero-emission cars, with a range of 300-350 miles, only require 10 minutes to fuel up. However, to date there are less than 40 public hydrogen fueling stations in the US, most on the west coast.

One eco-friendly vehicle that has made headlines this year is the Kia Niro. The EX model even made the Guinness World Records this year for the lowest fuel consumption by a hybrid vehicle, being driven across country—3,715 miles from Los Angeles to New York City—on 4.1 tanks of gas, setting a record of 76.6 mpg.

While actual mileage will vary depending on model, vehicle, driving conditions, and your driving habits, the Niro is no slouch of a hybrid crossover SUV. The 2017 base model boasts an EPA-estimated fuel economy of 50 mpg combined, with a starting MSRP of $23,785 (including an $895 destination charge).

Making its way on the scene later this year is the all-new 2018 Kia Niro Plug-In Hybrid Electric Vehicle (PHEV) variant. This crossover promises to deliver on utility and performance, plus it has the ability to go into a fully electric mode. Fun Fact for Amazon users: if you want to know more about the upcoming Niro, or even schedule a test drive of a currently available model, just ask Alexa. The addition of The Niro Skill for Amazon Alexa will deliver instant access for interested consumers.

It’s true that green vehicles tend to start out on the upper end of the affordable scale, but the cost can be worth it in the long run. If credit issues are making your dreams of driving an eco-friendly vehicle seem out of reach, don’t worry. The good news is that there are plenty of hybrid models available as used and certified pre-owned (CPO) vehicles.

The even better news for people with bad credit is that Auto Credit Express wants to help you take the first step toward finding a dealer that can help you. Our network of dealers has access to special finance lenders that can work with people with credit challenges. Simply fill out our online auto loan request form to get started.