Car pool lanes have become a popular thing throughout the United States, and California is the first of these states to pass this law about hybrid cars in the HOV lanes. 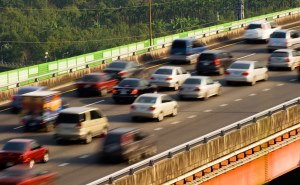 California has always been the state in the U.S. that gets its foot in the door first to promote greener living to its residents, and here it is again, ahead of the pack. While many states that are very populous have adopted an HOV (high occupancy vehicle) lane on their highways, California has just sweetened the deal. You may not know the difference between hybrid, plug-in hybrid, or electric vehicles, but regardless of which one you drive, you may be able to drive in HOV lane, by yourself, for four more years than expected.

For those of you that don't know, an HOV lane is a lane for people who car pool to get where they're going. In order to drive in this lane on the highway you must have a minimum of two passengers in your vehicle, or a have a special "go green" sticker on your car that is only issued by the DMV. When the law to allow hybrid vehicles in the car pool lane passed, the original bill stated that it would expire in the year 2015, but now this bill has been extended to 2019.

Stickers That Get You Into the HOV Lane

There used to be three different stickers that you could have on your vehicle that would get you into the special highway lane, but the old yellow sticker is no longer eligible. The green sticker is only available to the first 40,000 applicants that are financing or leasing a new car that meets California's Enhanced Advanced Technology Partial Zero Emission Vehicle. In simpler terms, these sticks are available to plug-in hybrids such as the:

The white stickers that you can get at your DMV are available to an unlimited amount of applicants whose vehicles qualify for the Federal Inherently Low Emission Vehicles (ILEVs). In layman's terms, the car's that qualify for this are the 100% battery electric and hydrogen full cell vehicles that operate on no gas at all, and therefore, create no emission along with compressed natural gas (CNG) vehicles. These include cars like the:

If you are caught in this lane without two or more passengers, or one of the above mentioned stickers on your car, you could face up to a $481 fine – unless you're on a motorcycle. Motorcyclists are able to use these lanes when they are riding solo, too.

Why California is Extending the Bill

The yellow sticker was discontinued in 2011 because the Calif. DMV handed out 85,000 to hybrid owners throughout the state. Once the green sticker became available, they expected to sell the 40,000 HOV land stickers by now, and they haven't even come close. As of August, only 16,000 stickers had been distributed because many people are starting to wonder are hybrid cars are worth their price tags or not.

With the bill's date extended, the governor is hoping to be able to push the people that are teetering on the idea of buying a plug-in electric car, or not, to do so. The state is hoping that all of those people that sit in 5 o'clock traffic and think to themselves, "It would be nice to be able to jump in that lane and just go" will take the plunge, and buy an all-electric vehicle to be able to do just that, and give them more time to make that decision.

As the definition states these lanes are only for vehicles that have more than one occupant, and unfortunately, it doesn't count if you have pets, dolls, or ghosts traveling with you on your journey. The only vehicles that are allowed to travel in the car pool lane with just one occupant are clean air cars that have a white or green sticker. All others will be subject to a fine.

There are some HOV lanes in Northern California that are part-time lanes which means that they are only considered car pool lanes during high-use commute hours (like morning and evening traffic). These lanes are open to all drivers of the highway – including those with just one person – at all other times of the day.

If you're driving in the lane and there are two double lines, white or yellow, you are never to cross these lines. Motorcycles are also never allows to ride on, between, or cross these lines, either. If you need to enter or exit the HOV lane you must wait to until you are at a single white dashed line to do so.

Some of these HOV lane rules are so strict that not even emergency personnel can use these if there is only one occupant. Luckily, if they are rushing to an accident they almost always have multiple responders with them!

Sitting in traffic is a drag and when you see other drivers zipping past you without a worry in the world about the traffic it can make you even more irritated. Cut down on the time you spend sitting in a 'parking lot' on the 405 and on the amount of emissions you let into the atmosphere with your conventional car and instead purchase a plug-in hybrid or all-electric vehicle and get past the traffic jam.

At Auto Credit Express, we have a network of new and used car dealerships throughout Southern and Northern California that can get you into the fast lane regardless of your credit scores. When you apply for a pre-approval online you will have the peace of mind knowing you won't be turned down when you walk into the dealership, and you will have the ability to drive – alone – in the HOV lane. Get started today with our application, and you could be in your new car tomorrow.

Types and Consequences of Road Rage