Car buyers with damaged credit should be wary of too-good-to-be-true car deals. There's a chance that the vehicle that looks perfect could be flood damaged.

In late March of 2016, Texas and parts of the South-Central U.S. were hit by severe storms that triggered massive flash flooding and hailstorms. Now, these areas are recovering, and the reports are in, showing that the worst losses occurred in Texas, where these weather conditions caused an estimated $600 million worth of insurance claims for damage to automobiles and homes.

Keeping a Watchful Eye on Sales of Flood Damaged Cars

As with all major natural disasters, NICB assists law enforcement agencies, as well as insurance and car rental companies with identifying and cataloging water-damaged vehicles to keep them from being resold to unsuspecting consumers.

Already, authorities estimate that thousands of vehicles may have been flooded. "NICB agents see it time after time. Natural disasters bring out dishonest salvage dealers who don't tell you that the vehicles they're selling are heavily water-damaged," said NICB President and CEO Joe Wehrle. "Consumers need to know that these vehicles may appear advertised for sale without any indication that they were affected by the flooding. As always, buyers should be careful when considering a used vehicle purchase in the weeks and months following a disaster like this." 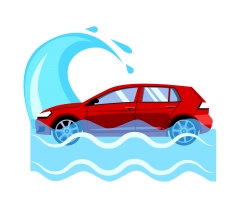 So, what can car buyers do to protect themselves from falling prey to this deception? First of all, NICB recommends that buyers take advantage of its free online service called VINCheck, which contains vehicle data from insurance companies representing about 88 percent of the personal auto insurance market and lets buyers see whether a vehicle has ever been declared as "salvage" or a total loss. It also alerts users if a vehicle has been stolen and is still unrecovered.

In addition to that, Carfax has some tips on what buyers can do to further ensure that they do not end up with one of these salvaged vehicles.

Always work with a reputable dealer
Keep in mind that the absolute cheapest is not always the best choice. A deal that may look great on paper may only be good on paper. Make sure you are working with a dealership that is known for having great relationships with their customers. As Chris Brewer, a Carfax blogger, states: "Well-established dealerships are not in business for short-term financial profit. If your community has a family-owned dealer that has been in the same location for three decades, there is a good chance they aren't going to risk everything to make a few quick dollars selling misrepresented flood vehicles."

Inspect the interior and exterior of the vehicle
Do a thorough inspection of the car, inside and out.

Get the eye of a professional
Before you sign that car loan contract, have the car inspected by an ASE Certified Master Mechanic, as well as a Body Specialist. Whether you suspect that your prospective purchase is a salvaged vehicle, or the vehicle history report (VHR) shows a clean bill of health, the best way to ensure that it is in the best condition possible is by having it looked over by professionals who see this kind of stuff every day.

Take the car on a thorough test drive
Once again, make this a standard practice when you are looking to purchase a vehicle, regardless of suspected flood damage. Check for any strange odors while driving and make certain all features, such as displays and speakers, are working properly.

The team here at Auto Credit Express has been helping car buyers with damaged credit get connected with a dealer who could finance them for nearly two decades. Our nationwide network of reputable car dealers makes it possible for us to find you a dealer nearest your local area that can help you get approved. Complete our fast, secure and simple online application to get started today.

Flash Flooding and Your Car