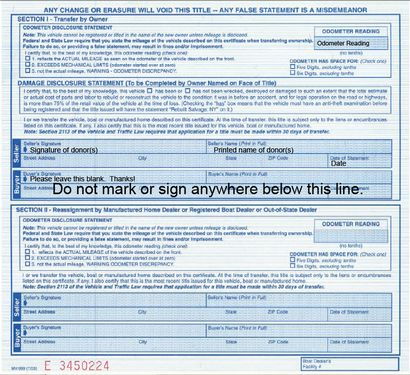 What we know about branded titles

Just because no lender in their right mind would finance a used car that had a branded title with a high risk car loan doesn't mean some unsuspecting buyers won't find themselves making payments on one.

At Auto Credit Express we know this is true because for the last twenty years we've been helping people with poor credit scores find dealer that can arrange for auto loan approvals.

During those two decades, we have occasionally received complaints from consumers (none of them applied through us) that have been duped by unscrupulous sellers.

The results can be disastrous –with problems ranging from electrical systems to engine and transmission failures. It's even more of an issue for people with poor credit who are on limited budgets.

So here is what used car buyers need to know:

If a used car or untitled new car has been involved in an accident or event that caused enough damage to declare it a total loss, if it can be repaired that vehicle is issued what is known as a "branded title."

As a rule, banks, credit unions and even lenders that offer only high risk car loans will not finance cars with these types of titles.

These branded titles can vary by state but usually include the following types:

Rebuilt – A vehicle previously branded as “salvage" that has been repaired and inspected. These vehicles might be drivable, but having this type of title means that it was, at one point, a salvage vehicle.

Salvage – A vehicle with sufficient damage that would typically cost between 75% and 100% of its value to be repaired. In states with no rebuilt brand, salvage vehicles that have been repaired still carry the salvage brand on their titles.

Flood Damaged – A vehicle that has been severely water damaged. In some states a flood damaged vehicle might be issued a title with either a salvage or rebuilt brand.

Fleet – Although these vehicles typically are not issued a branded title, most states require that vehicles previously used as taxis, daily rentals or police cars must be designated as fleet vehicles.

Mileage unknown – Also usually not considered a brand, most states require that a title be notated if vehicle mileage is unknown due to odometer replacement or other related issues.

Stolen – These vehicles often don't have their own a brand, although many states may refuse to title a recovered stolen vehicle. Due to the damage they can sustain, many of these vehicles receive other types of brands so they cannot be re-sold.

Depending on the state from which it is issued, the colors of branded titles can be the same or different from those of clean titles. Either way, branded titles will have a notation at the top or the bottom setting them apart from a regular title.

What you can do

Your best chance at avoiding buying a previously damaged vehicle is to first run its VIN number through the national database, then request a vehicle history report and, finally, have it thoroughly inspected by both a certified master mechanic and a body and frame specialist prior to signing any paperwork.

One other thing you should know about: if your credit scores are poor or you've been turned down for a conventional auto loan, you should know that Auto Credit Express matches consumers with credit issues with those car dealers that can arrange for auto loan approvals.

So when you're ready to reestablish your car credit, you can begin the process by filling out our online car loans application.