The Fed, formally known as the Federal Reserve, increased interest rates for the first time in nine years. What does it mean for borrowing purposes?

The Fed Hikes the Interest Rate

The Fed raised the interest rate a quarter point last week. It was the first rate hike since June of 2006. 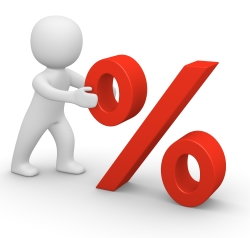 The unprecedented seven-year run of near-zero interest rates came as a response to the financial crisis of 2007-2009. The Fed launched a series of proactive monetary policies to counteract the effects of the largest economic downturn since the Great Depression.

This first rate hike in nearly a decade signals that the Fed has faith that the economy has largely overcome the wounds caused by the financial crisis.

"The first thing that Americans should realize is that the Fed's decision today reflects our confidence in the U.S. economy," said Chairwoman Janet Yellen during a press conference.

What Does a Rate Hike Mean?

The Fed is the central banking system of the United States. Their objective is to basically be the gatekeepers of the economy. One of their main tasks is to moderate short-term interest rates in order to speed up or slow down the economy to maintain low inflation, high employment rates, and high manufacturing output.

Raising and lowering interest rates indirectly influences demand, which in turn influences the economy. With the U.S. economy performing well - and with it expected to continue to do so - the Fed finally decided it was time to act.

Even so, the increase was modest. However, the Fed made it clear that this is the tentative beginning to a "gradual" tightening cycle. In other words, further hikes will be coming, slowly but surely.

What Does This All Mean For Me as a Consumer?

The Fed funds rate is what they charge banks to borrow from them. Anytime that they raise the Fed rate, consumers can expect the top commercial banks to raise the interest rates they charge to similar levels.

For now, the macro-level impact that the rate hike will have on household borrowing costs remains unclear. Policymakers will be watching closely in the coming weeks to see how other forms of credit will react to the rate hike.

As for the auto industry, the Fed's benchmark rate doesn't directly affect auto loans. Analysts expect the industry (automakers, dealers, finance companies) to swallow the marginal increase in additional cost caused by the rate hike. As such, initial surveys indicate that the rate hike will have a minimal impact on car sales. Consumers should still be able to take advantage of the blazing hot auto industry if they act fast.

But What If I Have Damaged Credit?

If you have bad credit, but need to buy a car, Auto Credit Express can help you. We have a nationwide network of affiliate car dealers that can help you obtain the auto loan approval you seek. All you have to do is fill out our simple and secure online application to get the process started.

The Smart Way to Buy a Car after Christmas

Why Driving is Better than Flying

Staycation: Save Gas and Money