Market conditions are all over the map right now, and many Americans are feeling it at the gas pump. This week, fuel prices, which had been letting up some, increased to more than $4.00 a gallon on average across the U.S, again. Here's a look at what's driving gas prices, and how it could impact car buyers. 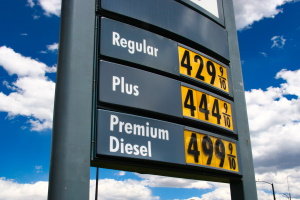 Gas prices top $4.00 a gallon. According to AAA, as of this writing, gas prices in America average $4.22 a gallon for regular, $4.59 for mid-grade, and $4.88 for premium. These prices are $0.09 higher than a week ago, and $1.31 more than a year ago. Where the prices will stop is anyone's guess. They had fallen for a short time, but are now on the way back up. Some western states are seeing prices average of more than $4.50 a gallon, while those states in the south enjoy the relatively low prices of around $3.80 a gallon.

With the global energy disruption, prices remain high. Many consumers are hoping we don't have to endure extremes in the coming weeks and months. However, as more countries are impacted by the Russian War on Ukraine and other supply chain issues, crude oil prices are continuing to hang around $100 a barrel, accounting for much of the reason prices aren't coming down.

On March 8, the U.S. banned all Russian energy imports, which escalates the price Americans are paying at the pump. But, only 8% of our energy supply came from Russia in 2021, according to ABC News. It's unclear at this stage what further impact Russia's invasion of Ukraine will have on fuel prices and the auto industry as a whole.

Summer means higher prices. The current state of the world isn't the only reason we're seeing price spikes at the pump, though. Many We were already seeing higher prices as covid restrictions began to lift, people went back to the office, and more people take to the roads to get out of the house. Now, as we head deeper into spring and warmer weather, more and more people are hitting the open road and driving up the demand for fuel.

Will Prices of Gas Come Down?

Prices have already begun to fluctuate, heading down for a few weeks, before making an about-face on May 2. For now, prices are still soaring.

And, prices may continue to rise throughout the year, but once the price of crude oil comes down, and supply and demand equal out, prices should begin to abate. In a recent article, Patrick De Haan, head of analysis for GasBuddy.com, says that "the high prices are likely to stick around for not days or weeks, like in 2008, but months."

How Can I Save on Fuel Costs?

With gas prices hitting all-time highs, many people are wondering how to save money at the gas pump. Besides joining your local wholesales club, or earning points toward gas savings, you can use an app to find the least expensive fuel near you. But those savings only go so far.

With the increase in fuel cost still unpredictable, could it make sense to opt-out of the gas-fueled car market altogether? Many people think so, evident by the recent shift to electric vehicles. EVs can save you money in rebates in some states, such as California, and many of them qualify you for money back from the Federal EV tax credit.

If you feel priced out of an all-electric car, some hybrid options are still affordable and can save you on gas costs each year. If you drive a lot, investing in a hybrid could be the way to go. Some hybrids add 20 miles per gallon or more to each tank compared to their non-hybrid counterparts, practically cutting fuel costs in half for some drivers. These fuel-conscientious cars can get far more miles out of a tank of gas, ultimately saving you hundreds at the pump.

Be sure to check back for updates.

Green Driving Habits Can Help Your Pocketbook & the Environment