With fuel cost rapidly on the rise, many people are looking to save at the pump, and one way to do so is with a hybrid car that sips its gas. Hybrid vehicles are becoming increasingly popular among conscientious shoppers, but are they worth it? Let's take a look at some affordable hybrid cars and how they can save you money in the long run. 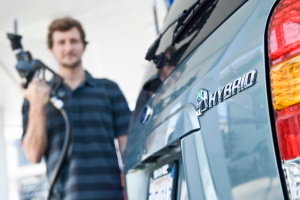 Do hybrids really save you money? Hybrid cars can save you money compared to regular gasoline vehicles. Regular vehicles expend all their energy and don't do anything to get it back, while hybrid cars recapture some of that through regenerative braking, electric motor drive assist, and automatic stop/start. These systems enable cars to be made with smaller more fuel-efficient engines without sacrificing power or wasting energy.

Because they can go further on a tank of gas, you fill up less, and ultimately save money. However, hybrid vehicles tend to cost more from the start, so your savings may come down to how much you drive.

Let's look at a 2022 Toyota Corolla Hybrid, for example. It gets 52 mpg combined, as opposed to 33 mpg for the non-hybrid model. According to Fueleconomy.gov, it cost about $1,041 a year on average to fill up the Corolla Hybrid, and $1,641 to fill the standard model. This equals about $600 in fuel cost savings per year. But the Corolla Hybrid has an MSRP of $24,775 to the standard version's $21,200 base price tag.

Most affordable hybrid vehicles. When it comes to hybrid vehicles, they're typically around a few thousand dollars more than their standard twins, but many can still be found for under $25,000. Some of the cheapest hybrid vehicles you can buy include the Ford Maverick for $21,490, the Hyundai Ioniq Blue for $24,645, and the Toyota Corolla Hybrid for $24,775.

Some hybrid vehicles not only command a premium price, but many of them are also hard to find amid current inventory tightening. The best way to know for sure what hybrid cars and deals are out there is to contact a dealership to find out what they can do for you.