The vast majority of drivers in the United States don't think twice about pumping their own gas. It is just something that they do. However, if you are a resident of Oregon or New Jersey (or the town of Huntington in New York), you may not even know how to pump your own gas. This is because it is (mostly) illegal to do so.

However, at least in Oregon, this may change at some point in the not-so-distant future.

Back in 1951, a law was passed in Oregon banning "any person other than the owner, operator or employee [of a dispensary where class 1 flammable liquids are dispensed at retail]" from using a "pump, hose, pipe or other device for dispensing the liquids into the fuel tank of a motor vehicle or other retail container." And violators of this law can be penalized with a fine as high as $500.

It was only just recently that this ban was loosened a bit. Now, non-commercial drivers in less populated rural counties in Oregon may pump their own gas, but only if an attendant isn't present and it is between the hours of 6pm and 6am. And data collected from the PEMCO Insurance Northwest Poll suggests that many Oregonians would like to see the ban on self-service pumps banned entirely. 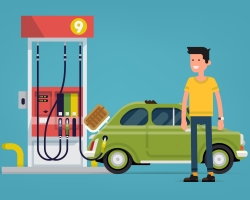 According to the poll, 51% of drivers surveyed are in favor of keeping the gas pump law the way that it is, 41% think that it is time for a change. This slight minority of Oregon residents are in favor of amending the law to allow self-service in every county. And it is interesting to note that the majority of drivers in Oregon who support self-service gas pumps are younger voters (below 45).

New Jersey is Proud Not to Pump

Things are a little different in New Jersey. Recently proposed legislation to lift the state's 1949 ban on self-service gas stations was DOA. Both the State Senate president and his counterpart in the State Assembly declared that they would never bring the bill to a vote. And Governor Chris Christie, who has publicly supported the idea of self-service stations in NJ, has stopped talking about the matter because, as he puts it, "I get my head handed to me."

Why are New Jerseyans so devoted to the full-service experience? Executive director of the New Jersey Gasoline, C-Store, Automotive Association may have summed it up best when he stated, "It's become a part of our culture." And it is true that if you walk around any part of New Jersey for a day, you are likely to see multiple bumper stickers, ball caps and t-shirts proudly proclaiming, "Jersey Girls Don't Pump Gas."

Pros and Cons of Self-Service

Both defenders of and opponents to self-service gas pumps have made compelling arguments for their side.

According to those who favor full service gas stations . . .

And those who support self-service pumps will tell you . . .

While it seems that Oregon may eventually become the 49th state to fully allow residents to pump their own gas, New Jersey could remain completely full-service for many years to come. And unless they travel to either of these states, most Americans will continue to absentmindedly reach for the gas nozzle, oblivious to the fact that they are exercising a liberty that others lack.

Before considering whether or not you're in favor of pumping your own gas, you may need to buy a car or replace a current vehicle that has become unreliable. If this is the case, but you're worried that your poor credit will prevent you from getting approved for financing, Auto Credit Express can help. We connect bad credit car buyers with dealers who are qualified to handle unique credit situations.

All you have to do is fill out our fast and secure online application to get started today.

How Identity Theft Occurs at the Gas Station