Though the official numbers aren't out yet, predictions show August's adjusted sales figures for new cars to be 2.6% lower than in 2021. Despite lower vehicles sold, money is still being made. Vehicles are on track to be the most expensive they've ever been – exceeding $46,000.

This expected average price isn't just up a few percent from last year. The increased amount of a new car transaction is set to reach an average of $46,259. That's a price increase of 11.5% year over year, according to J.D. Power. This is the highest average new car transaction price ever recorded.

“Traditionally, August is a high-volume sales month as manufacturers launch marketing actions to clear out the last model-year vehicles and start sales of the new model-year products," Thomas King, president of the data and analytics division at J.D. Power, said. "This August, the industry is still constrained by insufficient inventory to meet robust consumer demand. However, the silver lining for retailers—and manufacturers—is that transaction prices and profits are continuing to reach record levels even in the face of rising interest rates." 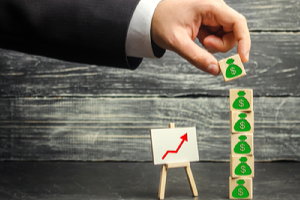 “Therefore, even though the sales pace is down 2.6% year over year, buyers will still spend nearly $45.4 billion on new vehicles this month, the second-highest level ever for the month of August and up 13.0% from August 2021,” King added.

What this means is that new cars are more expensive than ever, but prices aren't dropping since customers are willing to pay to get the vehicle they want amid current industry shortages.

According to J.D. Power data for August, we're also seeing far fewer incentives being given on vehicles. This August incentive spending per unit is only expected to hit $969 – down from $1,834 last August.

So, when you can qualify for a new car, you'll find fewer deals on vehicles these days. Incentives have been trending downwards for several months now, and there has been a noticeable lack of holiday sales events from many automakers.

Why You Should Have a Down Payment when Buying a Car