Types and Consequences of Road Rage

Driving can be a stressful experience. Anyone behind the wheel of a vehicle faces unpredictable variables on the road that sometimes cannot be controlled. While some of these variables - like weather conditions - can be minor, others such as traffic can be more challenging.

Friction between drivers often occurs when driving etiquette is not followed. Drivers that drive behind others too closely, cut others off, refuse to yield, speed, or drive distracted often find themselves the target of angry drivers. Angry drivers typically exhibit their road rage in three different ways, and ultimately face a wide range of consequences as a result.

The first type of driver that exhibits road rage can be described as the aggressor. Aggressors take extreme actions against other motorists, such as chasing, blocking, cutting off, and physically fighting with the other driver that may have triggered these actions. The aggressor will act forcefully and make it well known that he or she has been wronged, which only escalates the issue.

Different levels of consequences occur as a result of the aggressor's actions. The aggressor could use his or her vehicle as a weapon, causing crashes and significant injuries to the drivers that are involved. Additionally, aggressors may be cited by police officers for their actions and could face higher car insurance rates in the future. 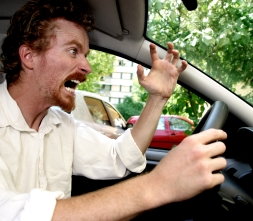 Communicators often enrage their target, which could cause a stronger form of road rage in the other driver. This can result in car accidents, injuries, or even deaths. While only communicating your displeasure to another driver might seem safe, it is far from it.

The final type of driver that displays road rage can be called the silent avenger. Drivers with this label will show their displeasure by finding ways to get back at their target silently. Examples of this include slowing down when another car is traveling too close, stacking up traffic by traveling in faster lanes, slowly merging into other lanes, and not reacting to green traffic signals quickly.

Even though silent avengers might follow all laws, other drivers are still likely to show their displeasure by becoming a road rage aggressor or communicator. Road rage only spreads and compounds if drivers do not remain calm in stressful situations.

Find Stress Relief when Purchasing Your Next Car

We know that purchasing a car with imperfect credit can be just as stressful as driving, but Auto Credit Express is here to make it as easy as possible for you. Fill out our obligation-free application and we will be in touch soon.