No one wants to spend thousands upon thousands of dollars on their inexperienced and possibly impulsive teen driver, but you want them to be safe for the exact same reason you don’t want to break the bank. This is where a new study can help! Consumers Reports and the IIHS teamed up to create a list of safe and affordable used cars for teenagers.

Should You or Your Teen Upgrade? 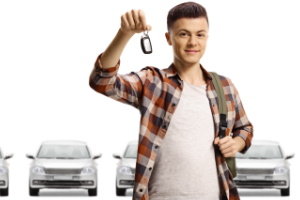 When you’re considering the right car for your teenager, you’ve also got to make the decision of whether or not you get to upgrade your current ride. While many teens get their own vehicle when they get their license, many parents see this as an opportunity to get another car for themselves and pass their old one down.

Whether you’re on the prowl for a new vehicle for yourself or your teen, you should consider safe, cost-effective models. Recently, the IIHS and Consumer Reports combined forces and made a list of just these cars that parents can look at for their teen drivers.

While the list is intended for new drivers, it’s also a great resource for anybody who wants a safe vehicle without the big price tag, or those looking for an affordable car when their credit isn’t the best.

We’ve narrowed down the list of safe vehicles for teenagers to some of our favorites in the segments of: small cars, midsize/large cars, and minivans. All of the vehicles we picked are also under $15,000.

The list considers selling prices based on Kelley Blue Book valuations for the lowest trim level of vehicles in good condition that were sold in a private sale, so the prices you may find are likely to vary.

Cars listed in the study are measured by many factors including overall safety, reliability, weight, and crash test rates. However, the vehicles listed don’t have excessive horsepower since teenagers may be more likely to “test out” the power.

IIHS and Consumer Reports ranked 65 cars in total, separated by vehicle segment in two categories: best and good. All of the cars on the list are also under $20,000. Models vary, but Jeep, Dodge, Chrysler, and Ford didn't have the stuff to make the final cut.

Finding a Dealership for You

We chose these vehicles out of the 65 that we felt were best suited for teens, and borrowers on a budget. While going through options is a great place to start car shopping, if your credit is worse for wear, looking at vehicles doesn’t do much good if you can’t get approved for financing. Borrowers with bad credit scores can find it difficult to get ahold of a lender that has the resources to work with poor credit. We want to help with that!

Here at Auto Credit Express, we’ve been matching bad credit borrowers to dealerships with bad credit lending options for over 20 years. We’ll look for a dealer in your area after you complete our free auto loan request form. There’s no obligation, it’s secure, and we’ll get to work right away.

Picking Out the Right Car for Your New Driver