It used to be a common thing to razz new drivers with some harmless kidding about their driving skills. Unfortunately, according to the NHTSA, after years of decline, teen driving crashes and fatalities are on the rise, and that’s nothing to joke about.

Be Proactive with Your Teen

As a responsible adult, it’s important to teach new drivers essential driving skills so they can get behind the wheel with confidence and knowledge on their side. According to data from the National Center for Health Statistics (NCHS) and National Safety Council (NSC) research, more US teens are killed by car crashes than anything else and they're three times more likely to be involved in a crash compared to a more experience driver.

To help encourage teens and their families to buckle up, the National Organizations for Youth Safety (NOYS) has teamed up with the NHTSA and NSC to once again invite teens to the “Seat Belts Save Challenge,” which is designed to encourage increased seat belt use among teens.

Each year, these organizations invite high schools nationwide to develop a local campaign to increase seat belt use. Results are documented by unannounced belt checks before and after a school’s campaign. The challenge coincides with the beginning of National Teen Driver Safety week, and all schools entered in the challenge must complete their campaigns by November 15. There are three categories: best overall campaign, greatest improvement in seat belt usage, and highest seat belt use rate. Winning schools receive a prize of $1,500. 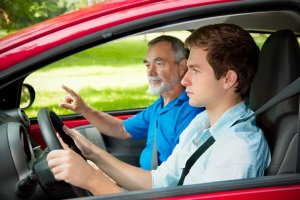 All topics are important when it comes to keeping your teen drivers safe. Remember to lead by example, and make sure they know what the consequences of their actions could be.

NHTSA recommends talking to teens about:

The findings of a new survey from Hum by Verizon were released to help raise awareness of teen driver safety as well. One maybe-not-so-surprising thing they found is that teen drivers may be overconfident behind the wheel. More than half of teens surveyed responded that they're just as good at driving as their parent or guardian, yet 72 percent stated feeling unsafe on the road.
Other findings from the survey include:

Making sure teen drivers stay safe is always a priority, not just during National Teen Driver Safety week. If you're thinking of helping your teen driver stay safe by passing down your car, or purchasing one for them, but are worried that bad credit may stand in the way of a new ride, let Auto Credit Express help.

We work with an extensive network of special finance dealers who have the lenders available to help people in many types of challenging credit situations. It’s simple to start the process by filling out our free online auto loan request form today!

Picking Out the Right Car for Your New Driver