The all-new highly anticipated 2017 Chrysler Pacifica has arrived in dealerships. A minivan that's highly anticipated? That's right. And Fiat Chrysler Automobiles (FCA) hosted a "Drive Away" event to kick off the vehicles' arrival in showrooms.

On Wednesday, April 27, FCA gathered more than 200 Chrysler Pacificas at the Palace of Auburn Hills in Michigan for a "Drive Away" event. The vehicles were showcased side-by-side before local dealers in attendance drove them off. It was the largest ever "Drive Away" event hosted by FCA. 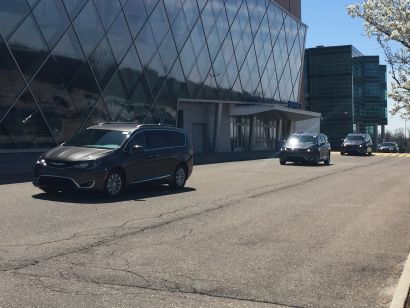 The FCA dealers in attendance were among the first to receive the 2017 Chrysler Pacifica. Each of the dealers got into one of the hundreds of minivans and drove them off to their respective dealerships in Michigan, Ohio, Indiana and Kentucky.

Now, according to FCA CEO Sergio Marchionne, you are about to see the Pacifica in the spotlight. The company plans to heavily advertise the minivan in May and June for the start of "minivan season." You may have already seen an ad from their "Dad Brand" campaign featuring comedian Jim Gaffigan and his family.

Most people, at least at some level, choose their vehicles based on practicality. For families with multiple children, nothing is more practical than a minivan. With their sliding doors, roomy interiors, and (oftentimes) bucket seating, they are designed to serve families.

FCA is hoping to change all of that with the 2017 Pacifica. That's why they reengineered it from the ground up and went with a different name for one of their minivans for the first time in over 30 years.

All vans aim to offer the highest levels of functionality, versatility, and kid-friendly features possible, and the 2017 Chrysler Pacifica is no different. But it also adds the one thing that's been missing from the segment: style.

Do You Need Auto Financing?

The Drive Away event celebrated the fact that the 2017 Chrysler Pacifica, which is available in five different trim levels, is on sale now at FCA dealerships. But when you have less than perfect credit, you may not feel like celebrating.

If you need to finance a vehicle but you think that your credit won't allow you to be approved, just let Auto Credit Express help. We connect car buyers with damaged credit to automobile dealerships that can get them approved fast for auto financing.

You could be next if you simply complete our secure and obligation-free online application. It only takes a couple of minutes of your time and it doesn't cost a penny!

Buying a Used Minivan with Bad Credit in Knoxville, Tennessee

What You Need in a Minivan