When you’re thinking of buying a car, you want to make sure you’re getting the best deal possible. One trick is to know what time of the year most deals are offered.

Best Time of the Year to Buy a Car 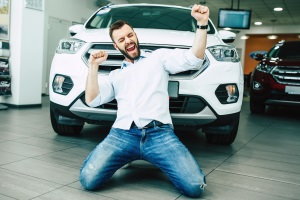 One of the prime times to buy a car is at the end of any month. Most dealerships have a sales target, and are looking to deliver as many vehicles as possible before the month ends. This can be tricky, though, because the dealer may have hit their target and may not offer you a better deal.

Another time to consider car buying is at the end of the calendar year. December typically has the highest discount off MSRP along with the highest incentives. This is because dealers are looking to get rid of any remaining inventory from the previous model year.

Best Month to Buy a Car

Behind the month of December are November and October for the best discounts offered. As for the worst months, they’re January, February, March, and April.

What about the best day? The best days are Monday and Tuesday, when the week is just starting out. The salespeople are generally more relaxed at the beginning of the week because fewer people come through the doors, and are more stressed by the end of the week. Some salespeople could be selling to more than one customer at a time, and that can mean a missed opportunity on a great deal for you if they’re trying to get you in and out the door. Note that if the dealership you’re going to is closed on Sundays, you can delay your visit until Tuesday or Wednesday.

Other Times to Buy

Beyond the day of the week and month of the year, the vehicle’s design and life cycle can produce great deals, and this can happen at any time of the year. Here are two examples of those cycles: before a major redesign, and after the announcement that a model is being discontinued.

When a car is being redesigned, it usually means it’s being given a new exterior and interior design along with the addition of newer and better equipment or technology. To prepare for the incoming redesigned models, manufacturers offer discounts on outgoing models to make room for the new ones.

As for a discontinued model, you may find even bigger savings. The issue with discontinued models is that they depreciate more quickly than the average vehicle, but if you aren’t concerned about the future trade-in price and plan on keeping it for a while, this is a great way to find a deal on a new car.

Best Holidays to Buy a Car

You’ve probably seen ads around the holidays about the great bargains dealers are offering. But which ones are worth the money? Many are great deals, but in order to get the best deal possible, it helps if you get prepared by doing research and test driving the vehicle before the sale begins. There are two types of holiday sales: the three-day weekend holiday sale and Black Friday.

The three-day weekend holidays include Presidents' Day, Memorial Day, the Fourth of July, and Labor Day. The best holiday deals to consider depend on what you’re looking for. Memorial Day starts the summer buying season, and typically involves deals with a larger selection of outgoing models to choose from. The Fourth of July has more of a mix of older and newer models, while Labor Day typically has a wider selection of new models to choose from compared to those year-end sales.

As for Black Friday, here in the US, we all know it’s the craziest day for the retail industry. But it’s also a good time to consider buying a car. Black Friday deals on vehicles are a newer concept in the automotive world, but are getting people through the doors and out with great savings. Many manufacturers offer discounts on outgoing models that can be better than the year-end deals. But remember to do some research beforehand, because Black Friday sales are typically offered just on the Black Friday weekend.

Buying in a Timely Manner

Knowing when to buy a vehicle can save you money and time trying to find the best deals out there. On top of that, it’s important to know where you need to go to get the financing you need. Especially if you have less than stellar credit, this can be a struggle on its own.

When you’re ready to start the car buying process, let Auto Credit Express point you in the right direction. We work with an extensive network of special finance dealerships that have the lending resources available for people who are struggling with credit issues. There’s no obligation or cost for our service. Just fill out our auto loan request form to get started today.

Is There a Right Time to Buy a Car?

Should I Shop for a New Car on Black Friday?

When is a Good Time to Buy a CPO?