Don’t Let Your Safety Take a Back Seat

Mom used to say “This car is not moving until you put that seat belt on.” As we have grown up, most of us listened, but there are still people who don’t use their safety belts, especially in the back seat. Often, people assume that the only person hurt by not wearing a seat belt is themselves—but they could be dead wrong. 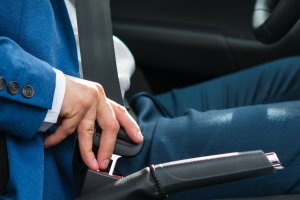 A 2016 survey by the Insurance Institute for Highway Safety (IIHS) brought to light a clear misunderstanding about why safety belts are important. Without proper restraint in the rear seat of a car, an unbelted person can hit surfaces and people with full force, causing serious injury or death. Data shows more than half of the people in the U.S. who die in crashes each year are unbelted, even though seat belt use has been proven to save lives.

The IIHS found that four out of five adults who admit to not always using their belts say they don’t bother with them for short trips or when using a ride-sharing service. The survey showed 72 percent of respondents who had ridden in a back seat in the previous six months said they always buckle up when in the back, while 91 percent say they always use seat belts in the front seat.

The survey also revealed that many back seat passengers don’t buckle up, because they feel a rear seat is safer than a front seat. In the past, when people weren’t used to buckling up, the back seat was the safest place to sit in a car. Not so anymore. High levels of seat belt use, increased safety technology and more crashworthy vehicle designs have lessened the safety advantages to riding in the back. So, the back seat is as safe to ride in as the front seat—if you’re buckled up.

So, why aren’t people clicking that belt every time they ride in back? When asked, 25 percent of IIHS respondents said they believe it isn’t needed because the rear seat is safer. The next most popular answers given: using a belt isn’t a habit, they forgot, or they simply never wear one. Another 12 percent of people reported uncomfortable, poorly fitting belts as a reason, while 10 percent said they couldn’t find the belt or buckle.

According to the survey, people between the ages of 35 and 54 were least likely to say they always buckle up in back seats. This age group is 10 percent less likely to always use a seat belt than adults 55 years old, and older. Meanwhile, 73 percent of adults between 18 and 34 reported always using their belts. Additionally, 57 percent of people using a hired vehicle service reported using a safety belt every time, compared to 74 percent of people riding in personal vehicles.

Not only will buckling up in the back seat save lives, it could also save the driver from getting ticketed. Though it is not a law in all states, 29 and the District of Columbia require rear-seat passengers to buckle up. All states, except for New Hampshire, require the use of front seat belts. Nearly 40 percent of people surveyed said they sometimes don’t buckle up because no law requires it. But, 60 percent of respondents said they would if it was the law.

Besides stronger belt laws, something that would make more than half of the part-time belt users buckle are more comfortable belts. People reported wanting softer or padded belts, plus adjustable shoulder straps, so that restraints don’t rub the neck. Among a variety of usability and comfort issues cited, tight and locking belts are a turnoff, regardless of age or body size.

There is no doubt that using a seat belt—regardless of where you are sitting in the car—saves lives. So, always ensure that all your passengers are buckled in. If your passengers can’t be restrained in the back seat due to missing or damaged seat belts, it may be time think about a different car.

If you know it’s time to buy, but bad credit has you thinking it’s not possible, Auto Credit Express wants to help. Let us show you that there are ways to purchase a car with bad credit, if you know where to go. We work with a large network of special finance dealers who have the lending resources to help people with credit challenges. Get started today by filling out an auto loan request form now!

Buckle Up Your Pet

What You Show Know About Child Car Seat Safety

Car Seat Buying Guide: Which is Best for Your Baby?

Where Should Your Dog Sit in the Car?