A recent study from the Insurance Institute for Highway Safety (IIHS) found that automated speed cameras are saving a lot of lives.

A speed camera program uses various types of cameras to detect and deter speeders and help enforce the law. Those who are caught speeding on camera will be issued a ticket through the mail. These types of programs are far less common than the similar red light camera initiatives. 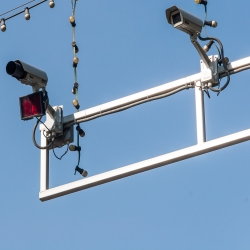 The IIHS studied a large community in Maryland near Washington, D.C. that has used a speed camera program since 2007. 8 years later, and their takeaway from the study can be summed up in one sentence:

If all U.S. communities had speed-camera programs like the one IIHS studied in Maryland's Montgomery County, more than 21,000 fatal or incapacitating injuries would have been prevented in 2013.

Here are some other impressive numbers from the study:

The numbers make it pretty clear that a well-managed speed camera program can effectively change driver behavior and lead to a substantial reduction in driving deaths and serious injuries.

Automated speed cameras help to enforce the law, yet they are often met with staunch legislative opposition. So controversial have they been that 13 states have passed laws that restrict or outlaw their use.

The IIHS hopes the results of this study will help sway more states to adopt legislation that implements a speed camera program. Fewer people will speed if there is a greater likelihood of being ticketed. Of course, the main goal of such a program needs to be increasing safety, not revenue.

Is Your Car Safe?

Not speeding is one way to reduce the likelihood of getting in a serious car accident. Another is having a car that runs properly. If your car no longer feels safe, it might be time for an upgrade. At Auto Credit Express, we specialize in helping people with damaged credit find affordable auto financing. Get started by filling out our safe and secure online application.