Like it or not, driverless cars are happening. It seems that autonomous vehicles are always in the news, and that it will only be a matter of (a relatively short) time before it will be commonplace to see a car in motion with no one at the wheel.

So, what will you do with your commuting time if your attention doesn't have to be focused on the road? You might be inclined to do some work, get caught up on social media or possibly even read a book. How about watching a movie? If Ford goes through with their new idea, you won't be limited to viewing that film on your phone or tablet. Instead, the automaker has patented the idea for putting a movie screen right in your car. 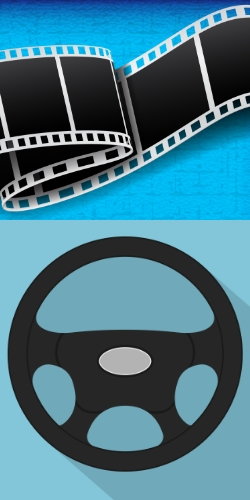 If you are already having trouble getting used to the idea that a computer will do the driving for you, imagine trusting a computer to drive you around AND having your windshield turned into a movie screen. That is precisely what Ford has envisioned with their "Autonomous Vehicle Entertainment System" concept. Do you think that you would ever be able to just relax and enjoy a film while barreling down the highway at 65 mph? Ford seems to be saying "Why not?"

In the design that Ford has patented, the movie screen would not always be in place. The windshield would just be a windshield when the entertainment system is not in use. The screen and projector would also retract into the ceiling if there is a need for a human driver to take control of the vehicle. However, if there is an emergency that requires driver engagement, how quickly can the transition from rolling movie theater to regular car take place? How truly safe is this windshield/movie screen idea?

Before the average driver spends too much time grappling with these questions, it is important to remember that Ford has merely claimed the patent for this product, and there are no immediate plans to put driverless movie screen cars into production. Ford spokesperson, Alan Hall, stated the following:

"We submit patents on innovative ideas as a normal course of business. Patent applications are intended to protect new ideas but aren't necessarily an indication of new business or product plans."

It may be a while before autonomous vehicles have advanced enough to become gas-powered living rooms. Even though the development and eventual deployment of driverless cars seems inevitable, there are still a lot of details to be sorted out.

The Future of Driverless Cars

One of the big questions concerning autonomous vehicles is whether they will primarily serve individual consumers or ridesharing communities. Companies like Ford envision driverless cars as personal vehicles that are marketed to private users. However, other figures in the automotive industry want to use computer-driven vehicles as a means to eventually have far fewer cars on the roads.

To illustrate this scenario, mobility expert Lawrence Burns has used the city of Ann Arbor, MI as an example. Burns has noted that there are currently around 120,000 cars in Ann Arbor, and he believes that the majority of these vehicles are idle most of the time. He believes that if the city were to become a "smart city" (primarily using driverless cars), Ann Arbor could be served with only 18,000 autonomous vehicles.

Buying a Regular Car with the Right Financing

For the time being, you will have to drive your own car to wherever you need to go. And if you need a car for work, school, or just your everyday routine, Auto Credit Express can help you get affordable financing. Even if you are worried that having damaged credit will prevent you from getting auto loan approval, we can match you with a local dealer who is qualified to work with your situation.

Just fill out our fast, secure and obligation-free online application to get started today.

After you are approved to buy your car, your credit will start to improve with every timely payment you make. If you want to learn about other ways to repair your credit report, click here for instant access to valuable resources.

Family Road Trips: How to Keep the Kids Entertained

Staycation: Save Gas and Money

Will My Bad Credit Always Haunt Me?