As automakers take strides to improve vehicle technology, we are coming ever closer to taking a passenger seat—or at least to doing less driving while we are in the driver’s seat. Though driverless cars are still a distant promise for the everyday consumer, the technology needed to make this future a reality is already well in place, thanks to the telematics industry.

Telematics refers to the combination of telecommunication and information processing. It has evolved into a term used to refer to automation in vehicles, such as automatic driver assistance systems, GPS navigation, and wireless vehicle safety communications. The gradual merging of these technologies is leading us closer to a future where self-driving cars are the norm.

From Science-Fiction to Reality

Hollywood’s love of science-fiction has shown us many versions of what the future of self-driving cars—also known as autonomous vehicles—will look like. From Knight Rider’s KITT to the vehicles featured in Minority Report and I, Robot, some details that were once imagined are now close to reality. This is evident as more and more companies roll their driverless vehicles out on the roadways for testing in real world situations.

So, does this mean you are going to see empty cars start rolling by as you go about your daily life? Not likely. Researchers are not turning out un-manned vehicles, but rather going along for the ride, monitoring vehicle performance from inside the car. Recently, Washington joined the growing list of states that are allowing autonomous vehicle testing—there are now 20 states in all. Due to this, Torc Robotics, a spinout company from Virginia Tech was able to complete a 2,500 mile six-day cross-country trip with their self-driving car, from Virginia to Seattle. On the trip, the car was able to navigate itself across 13 states through heavy traffic, a highway detour in the pouring rain, winding roads, avoiding road debris and even performing left lane merges.

Testing for these vehicles is also being done on an international scale. According to the Detroit News, in July, officials from the Michigan Department of Transportation and the Ontario Ministry of Transportation signed a document to “promote and foster growth of connected and autonomous technology testing and deployment.” This came as engineers from Magna International Inc. and Continental tested two self-driving cars in both the U.S. and Canada to collect data.

The researchers operated the vehicles over two international border crossings—the Detroit-Windsor Tunnel and the Blue Water Bridge—to gather data that may be needed so that autonomous vehicles can one day cooperate with border patrol officers. In addition to the border crossings, themselves, the cars drove autonomously for 92 percent of the seven hour trip.

Researchers are taking into account many factors of everyday driving situations in order to prepare the technology to someday be a safe and reliable reality. The eventual goal is for our cars to be tasked with the driving so that we are able to take advantage of our time behind the wheel. Just how would people use that time? A Harris Poll conducted for Erie Insurance this year aimed to answer just that. 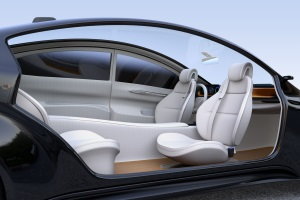 Here are some of their findings:

There are concerns about people putting too much faith in their current driver-assistance technologies. According to Adrian Lund, president of the Insurance Institute for Highway Safety (IIHS), "There are a lot of concerns about people checking out and we are trying to monitor that now." He notes that everything automakers do to make driving a little easier means that drivers pay a little less attention while they are behind the wheel. This is evident as distracted driving becomes a rising culprit in U.S. roadway deaths.

Scientists and engineers are hoping to make self-driving cars a reality in the future, so that travel can be consistent and predictable and, therefore, safer. This will, hopefully, drastically cut down on auto-related deaths. But we are still a very long way from that goal. Today, however, the technology that is building that future is available.

Features like forward crash-detection, lane-keeping assistance, and even drowsy driving detection are all features designed to keep you safe, and are available for consumers today. Even consumers with poor credit can take advantage of these systems as newer model vehicles become available in certified pre-owned and used vehicles.

Speaking of used vehicles, if you have bad credit, and are current in the market for one, Auto Credit Express can guide you toward a dealer in your area. Our network of dealers has the lending resources available to work with people in challenging credit situations. Let us help you get started today by filling out our cost and obligation free online auto loan request form now!

What Your Car May Do in the Future