Distracted driving has occurred ever since the automobile was invented. However, new data shows that traffic fatalities have dramatically increased in the first half of 2015 - a time in which technology is prevalent. There's a growing body of work that suggests that the distractions caused by technology are to blame for the increased number of deaths.

The National Highway Traffic Safety Administration (NHTSA) estimates that deadly traffic accidents increased 8.1% in the first six months of 2015. In 2014, traffic fatalities fell to their lowest point since the NHTSA began collecting data in 1975. 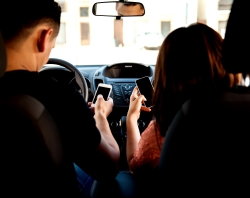 If the 2015 estimate holds up for the remainder of the year (final numbers won't be released until later in 2016), it would represent the single greatest year-over-year increase in traffic fatalities since 1946.

So, what's the deal with the dramatic rise this year? You would think that the improved economy and cheap gas prices putting more drivers on the road would be the culprit, but it's not. Deaths are rising at twice the rate of miles driven.

There is increasing evidence that suggests that distracted driving, caused by the use of smartphones and other technology, is partly to blame.

The NHTSA has data to prove that high-risk drivers are to blame - drunk drivers, drugged drivers or distracted drivers. While drunk drivers continue to be the biggest threat to roadway safety, the agency suspects that texting behind the wheel, or the use of technological devices in general, is the likeliest explanation.

According to their data, distracted driving caused 10% of the traffic deaths in 2014. They estimate that 80% of accidents come as a result of distracted drivers as well. But it's hard to identify and attribute when distracting driving is to blame, so the real numbers could be much, much larger.

Distracted driving is not a new concept, it's been around since before smartphones, mobile devices, tablets, and infotainment systems. However, technology presents a more serious and particularly dangerous problem because it involves all three of the main groups distractions fall under:

The use of smartphones and other technology requires a combination of all three distraction types at the same time, and that's not good for roadway safety. Using such a device will greatly increase the likelihood of being involved in an accident, yet drivers still can't seem to put their technology down.

A recent study conducted by the Department of Transportation found that:

And one could reasonably argue that these numbers are woefully below reality.

Yet, people continue to drive distracted. Hands-free devices continue to be made even though studies have debunked the myth that they decrease distraction. Automakers continue to put smartphone-based infotainment technology in vehicles. We basically admit and allow the fact that technology and driving is unavoidable.

This means that until serious restrictive legislation is put in place, it falls on us as individuals to stop distracted driving. You know what you need to do - put the device away until you get to your destination. Teach your kids to do the same. Whatever it is can wait until you arrive safely.

Getting the Vehicle You Need

While driving distraction-free is a great way to stay safe on the roads, having a vehicle you can rely on is another. If you need a vehicle upgrade and your credit is less than perfect, let Auto Credit Express help you. We'll pair you with a dealer in your local area that can get you in the safe transportation that you need. Just fill out our free and secure online application to get the process started.