Statistics have been published, campaigns have been launched and laws have been instituted, but drivers continue to multitask while driving. Kelley Blue Book's recently released Distracted Driving Awareness survey reveals that distracted driving is still a huge problem on the roads even though drivers are largely aware of the risks involved.

Even with the threat of negative consequences looming (nearly every state in the U.S. has laws prohibiting the use of cell phones while driving), 61% of drivers admit to using their phones or engaging in some other task when behind the wheel. 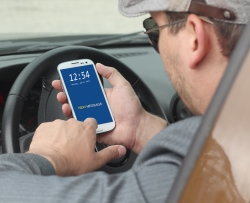 How are drivers using their phones while behind the wheel? 78% say they are talking on their mobile devices, and 71% are employing a navigation system. 67% of drivers surveyed admit to texting, while 47% report that they are using music apps. And even though a large amount of effort has gone into warning people about the dangers of distracted driving on social media platforms, ironically, 31% of drivers are still using social media while driving.

Input from the NHTSA

The National Highway Traffic Safety Administration (NHTSA) has noted that distracted driving is a threat to all drivers, but is especially dangerous for young drivers. They have estimated that 25% of all vehicle crashes involve some form of driver distraction. However, drivers under the age of 20 have the highest proportion of distraction-related crashes that end up being fatal.

When Distracted Driving Awareness survey participants were asked about the primary threats facing under-20 drivers, an overwhelming majority (71%) cited cell phone usage. Only 18% blamed drunk driving and a mere 10% of respondents reported that reckless driving among teens is a significant concern.

Understanding the Dangers of Distracted Driving

Sending a quick text message may not seem like a big deal, but according to Distraction.gov, the average time a driver takes their eyes off the road while texting is five seconds. So, if you are traveling at 55 mph, that's the amount of time it would take to cover the length of a football field. Would you drive that far while blindfolded? If you are texting while driving, that is essentially what you're doing.

Jack Nerad, executive editorial director and executive market analyst for Kelley Blue Book, believes that texting is a major culprit when it comes to driver distractions, but it isn't the only activity to blame:

"We all know that texting while driving is a serious distraction, but it isn't the only reason drivers are taking their eyes off the road. With the increase of in-car technology, there are more distractions vying for a driver's attention. Whether it is in-dash navigation, music apps or voice command call or text, more and more drivers are multi-tasking behind the wheel as opposed to focusing on the road."

In addition to tech-related distractions, drivers are also doing things (other than driving) that have nothing to do with technology or devices.

Strangely, the survey did not include questions about eating, grooming, reading or simply daydreaming. These are also common activities among drivers.

Accidents caused by distracted driving are completely preventable, and responsibility falls on every driver to not engage in distracting tasks while operating a vehicle. For information and resources about the dangers of distracted driving, you can visit Distraction.gov. While you're there, you can take the "One Text or Call Could Wreck it All" pledge. To promote distracted driving awareness within your online community, use #DriveSmart on Twitter and Instagram.

When you need to buy a car, you don't have to let credit issues distract you from your goal. Financing a vehicle purchase can be a fast and easy process, even if you have bad credit. Auto Credit Express has been helping bad credit car buyers for nearly 20 years, and we can provide assistance with your situation. No matter what your credit score looks like, we can connect you with a dealer in your area who is qualified to work with all types of credit.

Just fill out our simple and 100% secure online application to get started today.