Nobody likes getting stuck in traffic. Unless you are that rare person who has all the time in the world and a burning desire to practice karaoke, dealing with the delays caused by heavy traffic is a nuisance, a HORRIBLE, TERRIBLE, FRUSTRATING, RAGE-INSPIRING NUISANCE.

Cities with the Worst Traffic

And if it seems to you that your daily commute is getting worse, you may be right. According to the TomTom Traffic Index 2016, several major U.S. cities are currently suffering longer travel times versus a year ago. Who's getting stuck in the worst traffic? Overall congestion is heaviest in big West Coast cities, but growing metro areas in the South are not far behind. 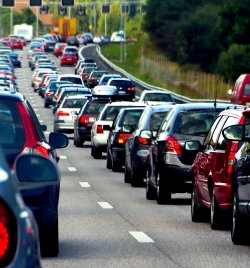 Do you live and/or work in L.A.? Congratulations. Los Angeles has been ranked #1 for having the worst gridlock. This city is just ahead of San Francisco, New York City, Seattle, San Jose and Honolulu.

How bad is it in La La Land? A typical half hour commute takes about 81% longer during evening peak periods and around 60% longer during the morning rush. If you routinely drive in Southern California, you can expect traffic jams to add up to 164 hours of extra travel time per year. No one can blame you for being upset, So-Cal friends. That's the equivalent of spending a full week stuck in your car.

It's a good thing that Seattle is described as "Very Walkable" on WalkScore.com because, according to TomTom, the city ranks as the country's second worst for evening rush hour congestion. If you have somewhere to be in Seattle when traffic is at its worst, you will experience a 75% increase in travel time.

Believe it or not, this rather gloomy study has a silver lining. It appears that traffic congestion has actually improved for drivers in Las Vegas, Denver, Tucson, St. Louis, Detroit, Minneapolis and Milwaukee. So, if you live and/or work in one of these cities, remember that it could be worse.

Tips for Keeping Your Cool in Traffic

Dealing with heavy traffic is not only a giant pain in the neck, it is also potentially dangerous. Any time cars are too close together on the road, the likelihood of a collision increases. Also, when patience dwindles and tempers flare up, drivers are prone to make irrational decisions that they wouldn't ordinarily make. As difficult as it can be, it is important to stay calm while waiting in traffic. Getting involved in an accident certainly won't get you to your destination any faster.

Look at it this way. Dealing with heavy traffic is a small price to pay to live in a great city. Be proud of your city's traffic problem. It's like winning a popularity contest. And even though you're not planning to be involved in a traffic accident, it never hurts to be prepared. Click here to find out about affordable auto warranties.

The Right Car for Your Commute

If you have a long daily commute that has been made even longer because of heavy traffic, you may want to consider buying a smaller car that is easier on gas. And if you have been putting off this purchase because of credit issues, you should know that auto financing is available. In fact, Auto Credit Express can match you with a local dealer in your area that is qualified to work with unique credit situations.

Just fill out our fast, obligation-free and 100% secure car loan request form to get started today.

Is Your Commute Killing Your Car?