If you’re thinking about making the switch to a green vehicle, it turns out you’re not alone. According to Edmunds, green vehicles will account for 4.4 percent of the overall market in 2018, up from the 3.2 percent last year.

All Types of Green Vehicles Set to Sell 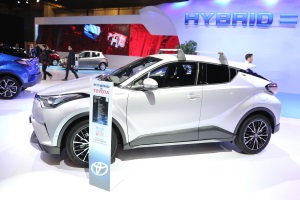 “…2018 will [still] be a banner year for green vehicles,” said Jessica Caldwell, Edmunds' executive director of industry analysis. “The price of batteries is coming down, EV range is rising, and shoppers will have more choices than ever.”

According to Caldwell, the lower end of the EV market will start to feel the pressure in the latter half of the year, when federal tax credits begin to decline for many manufacturers. But this will also signal the first hint of how ready the green car segment is to stand on its own.

As for 2018 on the whole, Edmunds predicts only 16.8 million new vehicles will be sold, down from the expected 17.2 million sold in 2017. If these projected numbers turn out to be on track, it'd mark the second consecutive year of decline after seven straight years of gain from 2010 to 2016.

Despite declining new car sales, the market is maintaining a healthy position, largely driven by the popularity of trucks and SUVs. According to Caldwell, 2018 vehicle production is slated to be better aligned to demand, but, as sales decline, retaining market share will become intense as manufacturers fight for their piece of a smaller pie. This could lead to some to increase incentives to keep sales strong.

“From a product perspective, many auto brands…will be phasing out slow-selling passenger cars in favor of in-demand small SUVs,” said Caldwell. “The rise in green car sales is really just a precursor to what [original equipment manufacturers] have in the works for the autonomous vehicles promised in 2019 and 2020. [This] will be a year of right-sizing for the present while putting some critical building blocks in place for the future.”

Where to Turn for Your Next Vehicle

As this year kicks off, many people will be looking to get in on the wave of available green cars. If you long to be part of that crowd, but bad credit has you wondering how it’s possible, why not turn to a leader in automotive special finance?

Auto Credit Express works with a nationwide network of dealers that have the lending specialists available to help people who are struggling with credit issues. Take the first step toward your next auto loan today. Just fill out our no-obligation online auto loan request form to get started!