Fiat Chrysler will soon cease production of both the Chrysler 200 and the Dodge Dart, and it isn't because either car is terrible. In fact, some critics might say that the opposite is true. Both the 200 and the Dart have been favorably rated by many test drivers and consumers.

So, why is Fiat Chrysler (FCA) giving them the axe?

Two things: These are good vehicles, but they're not great cars, and consumers are demanding other types of vehicles.

The Chrysler 200 and Dodge Dart Struggle with Bland Status 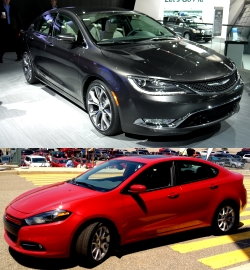 In their respective classes, the Dodge Dart (compact car) and the Chrysler 200 (midsize sedan) are considered to be pretty decent. Interestingly enough, in the U.S. News & World Report "Best Cars" rankings, both vehicles are placed at #16 in their classes. And while this is fairly respectable, there are 15 other cars in each category that are ranked higher.

This means that if a customer is looking for an affordable midsize car, they are probably going to buy a Chevrolet Malibu, Hyundai Sonata, Honda Accord, Toyota Camry or Nissan Altima instead of the 200. And compact car drivers are likely to favor a Honda Civic, Mazda Mazda3, Kia Forte or Ford Focus over the Dart.

Why would Fiat Chrysler want to struggle in these crowded categories with cars that have only received a mediocre reception from buyers? They don't, especially when they are currently making vehicles that sell very well.

Fiat Chrysler Has What Consumers Want

For a while, a lot of drivers have been ignoring smaller and midsize cars in favor of small to midsize SUVs and trucks and it looks like this is where consumer focus is going to stay for a while. In the SUV segment, Fiat Chrysler has done very well with the Dodge Durango and Jeep Wrangler and Cherokee.

The automaker has expressed interest in expanding their SUV range and making more of their currently produced vehicles that are in demand. They could accomplish this by building more factories, but new plants could end up becoming high-cost burdens if there is a downturn in the economy. So, they have made the logical decision to stop production on two models that no longer make sense and use these production lines to manufacture the vehicles that will generate more money for the company.

For example, because the Warren Truck Plant is one of Fiat Chrysler's oldest plants, radical changes would have to be made to its lines in order for the factory to produce the new Ram truck. So, Ram production will move to the Sterling Heights, MI plant, where the Chrysler 200 is currently being made. And it has been speculated that Jeep Cherokee production could eventually move to the Belvidere, IL plant, which now makes the Dodge Dart, but this hasn't been confirmed by Fiat Chrysler.

Fiat Chrysler CEO Sergio Marchionne has said that Warren Truck will eventually build the Jeep Wagoneer and the Jeep Grand Wagoneer, which are slated to be reintroduced in 2018. While Marchionne has not discussed specific plans for this line of large SUVs, he has made reference to "a family of Wagoneers."

The Grand Wagoneer (nicknamed the "Woody") was a very popular SUV that was made from 1974 until 1990. Fiat Chrysler hopes that when the model is resurrected in its updated form that it will be eagerly received by SUV enthusiasts.

Saying Hello to Your Financing Solution

If you want to catch a Dodge Dart or a Chrysler 200 before they take their curtain calls, or if you are interested in buying any other type of car, truck, van or SUV, Auto Credit Express can help you with financing. Even if you have bad credit, we can connect you with a dealer in your area that will give you the best possible chance to be approved for an auto loan.

We have been helping car buyers with credit issues for nearly two decades, and we look forward to getting you back on the road. We won't waste your time or charge you a dime for our service. All you have to do is fill out our fast and secure online application to get started today.

And if you are unsure about where you stand with your credit, click here for instant access to your credit score.

Vehicle Replacement After A Tornado